A large plot of land that once was supposed to be a school is now drawing quite a bit of concern from neighbors who fear it could soon be the home of a large apartment complex.

Back in 2019, Springfield Public Schools sold a 34-acre property south of Harrison Elementary School. The property was sold to SPI of Springfield, LLC. While the property is currently zoned for singly family homes (R-1), the developer initially requested it be rezoned for multi-family homes.

Residents in the area are upset by the proposal, which would lead to single-family homes and an apartment complex being built on the land.

People living nearby said the proposal comes with an assortment of issues.

As someone who has passed through the area on a bicycle this weekend, I can assure you that this is not in the city of Battlefield. 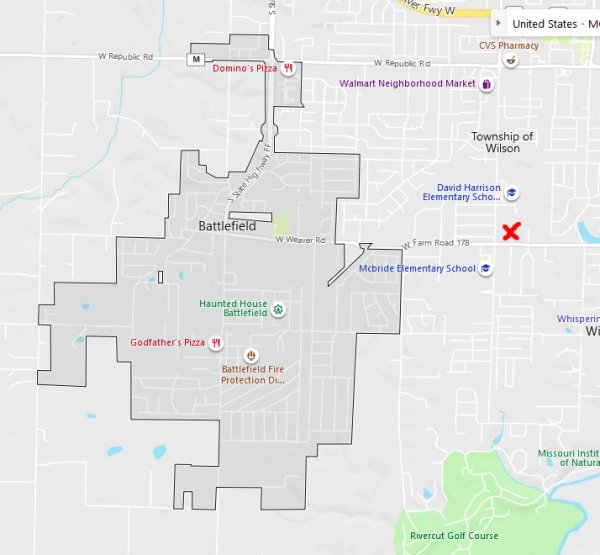 That’s unincorporated Greene County. It’s not even within the 65619 area code, which is the Brookline post office located way up north of Republic but curls around the eastern boundary of Republic and includes Battlefield to the east and Clever and Billings to the south (man, they have to go a long way to pick up their packages–it’s almost a half hour at freeway speeds for us). So I have no idea where KY 3 got the idea to call this neighborhood “Battlefield”. It’s more likely to be annexed by Springfield than Battlefield.

Previously, KY 3 extended the boundaries of Battlefield to the north.

I have to be a Battlefield partisan early, as the boundary of the city is the big empty field across the farm road from me, and someday, they might decide to annex Nogglestead.