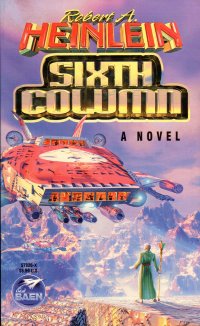 This Heinlein book comes from a 1941 magazine, a 1949 book edition, and then a fifth Baen paperback printing from 1999. That is to say, the book was in print fifty-eight years later. The cover has a retro-video game look to it that might make you think this is one of the juvie rocket-jockey things, but it’s not.

The story picks up at a secret Rocky Mountain military lab where a messenger finds that most of the scientists are very recently dead. Only a handful have survived some sort of accident, and the messenger was to tell the lab that it was to act independently as United States military command (and the country) had collapsed under an invasion from the Asians, who are apparently a blend of Communist China, Japan, recently amalgamated India, and elements of the Soviet Union. The messenger takes command, and the remaining scientist discovers that one of his colleagues had discovered another natural force somewhere between electromagnetism and gravity that can kill people by race/genetics as well as provide power and work miracles. So to resist the occupying army, they start a new religion and hope to make an effective stand before the occupiers realize what’s going on.

An interesting premise, and a bit talky in that Heinlein way (but not full of sex, as that’s decades away). However, the book does use an awful lot of slurs for Asians from slant-eyes to flat-faces and more (I couldn’t get away without putting them in as I have typed other ethnic slurs whilst talking about books in the past). You know, I am an old man now, so I come from an age where I can recognize that, when this book was originally published, the United States had just defeated an Asian power, the communists had taken over China, and people knew about the Mongol hordes. So I can accept the language as a product of its time and not hit the fainting couch or the streets in protest.

So a quick read, an interesting premise, talky, and prone to describing a military enemy in dehumanizing ways.