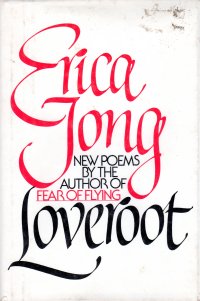 I have mentioned before that I read Jong’s How To Save Your Own Life, her 1975 sequel to her seminal novel Fear of Flying a long time ago, before I started writing book reports on this blog. I never read Fear of Flying, though. And I’ve read some about it (mostly Wikipedia) that says Fear of Flying was an empowering bit of second-wave feminism. I guess it fit into the zeitgeist of the time, when the early boomers were coming of early middle age (well, their 30s, which was middle aged in those days), and Erica Jong became a thing.

This was her third volume of poetry. I started reading it after Fully Empowered, and the second poem in the volume is “To Pablo Neruda”. As a matter of fact, the poems refer/allude to/directly address a number of poets, including Walt Whitman, Anne Sexton (twice, and apparently Jong new her personally), Sylvia Plath, Keats, and Colette. A lot of the poems in the book deal with being a poet and the poetic impulse, so Jong is learned and takes herself very seriously.

The poetry is often vulgar and only sometimes crosses the line into earthy and sensuous, but you can only use the word “cunt” never in your poems to be anything but vulgar. Perhaps that’s the point, shocking little old bourgeois moi. Perhaps I’m judging her a little harshly because for every passage where it’s appealing that she’s good to go without using the cunt, she looks like she could be one of my immediate relatives.

So maybe that squickied the lusty appreciation of this early 1970s authentic womanly carnal expression right out of me.

Overall, aside from a few interesting moments, the poems have a very collegiate feel to them as though they were written by a sophomore at a university somewhere immersed in a creative writing program than real musings of someone growing older. I paid $4.95 (the same as the book’s cover price in 1973) for this at ABC Books in June for a first edition in a mylar cover, I don’t expect I’ll pay that much for another book by this author. If I ever buy another book by her, which is unlikely.