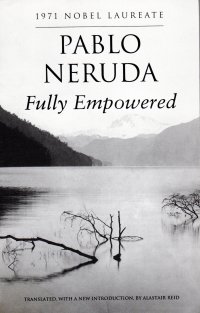 I picked this book up shortly after 100 Love Sonnets because I couldn’t think of another time where I’d be more primed to read more Neruda. As I have mentioned, I read a bit of a middle 1970s translation of Neruda that was, erm, not very literal–it inserted 1970s slang into the work where Neruda had not put it. 100 Love Sonnets, by my survey of the original Spanish on the left-facing pages, was very close. I hoped this volume would be, too.

It’s not as bad as the glimpse I had earlier (which is not this book; I looked for “I ain’t got no truck with death” specifically). This book does not throw slang into the mix, but it does use some synonyms for direct translations where I wonder how much license the translator took and why.

Also, the poems are longer, a little more free-flowing, and of varying topics, sometimes of a political nature, that makes the poetry more modern than 100 Love Sonnets. Which means I like it less to begin with.

At any rate, I probably did catch the book at the right time. I probably wouldn’t think anything that Neruda wrote would equal 100 Love Sonnets anyway, so it’s best to have read them almost back to back. Now, of course, undoubtedly two or three other volumes of Neruda’s work will catch me by surprise when I go looking for something to read. Or, worse, I’ll stumble across a second copy of this, translated with a different title, in a couple of years and will accidentally re-read these poems again without knowing it.