So I mentioned that I subscribed to four papers recently. Previously, I’ve been taking a couple of local weeklies, and I’ve let my oldest read them after I finished. He’s been a little unimpressed with them.

But he likes The Wall Street Journal. A lot. And I can see why: It’s a national paper with national and international news, business reports, and feature writing every day instead of a couple pages of news stories including little informal columns covering small towns and churches and perhaps a column to read every week (Jim Hamilton or Larry Dablemont). So he gets the paper off of the driveway and reads it before I do most days.

And it has inspired him to start his own paper. 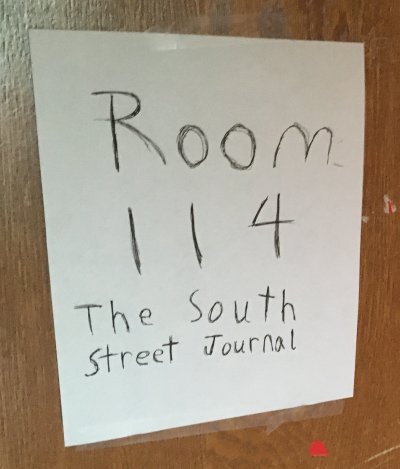 He’s starting high school this fall. By this age, I had worked for two middle school papers and had put out at least on dot-matrix-printed newspaper, the fan letter for the official Cricket Fan Club that I mentioned here (with other Cricket pictures and memories here and here).

I already have the first copy of the South Street Journal on my desk. It has stories about Mixer, Microsoft’s game streaming service, closing down as well as some recycled jokes. Not a lot of news, though, as Nogglestead is pretty quiet of late. So it’s more of a Reader’s Digest than a Wall Street Journal.

And it’s better than spending all of his day on video games and YouTube compilations of YouTube videos. Although I am pretty sure some of the time he spends on the laptop working on his articles he’s really cruising Instagram. Just like a real journalist. Except I guess they use Twitter.