(Another old essay, but not as old as some in the pile.)

I came across an old Polaroid in a box of photos and had to pause. I was scanning the pictures so that I could store the obviously comprehensible images in a format that only a machine can interpret. That’s just what one does with photographs in the twenty-first century, but it does give the more sepia-minded amongst us an opportunity to go through our old boxes of snapshots. Although each box holds hundreds of memories, a similar nature—here’s my brother and I here, here’s the front of the house there—makes the photos blur together. After all, my brother and I went everywhere together as kids, and I saw the house the same way thousands of times I drove up to it when we lived there. Once in a while, though, a single picture can trigger a cascade of unrelated memories.

This photograph, for example, blurrily depicts our dog turning away from the table. I had sold enough boxes of cards through a back-of-the-comic-book program to earn a Polaroid instant camera: 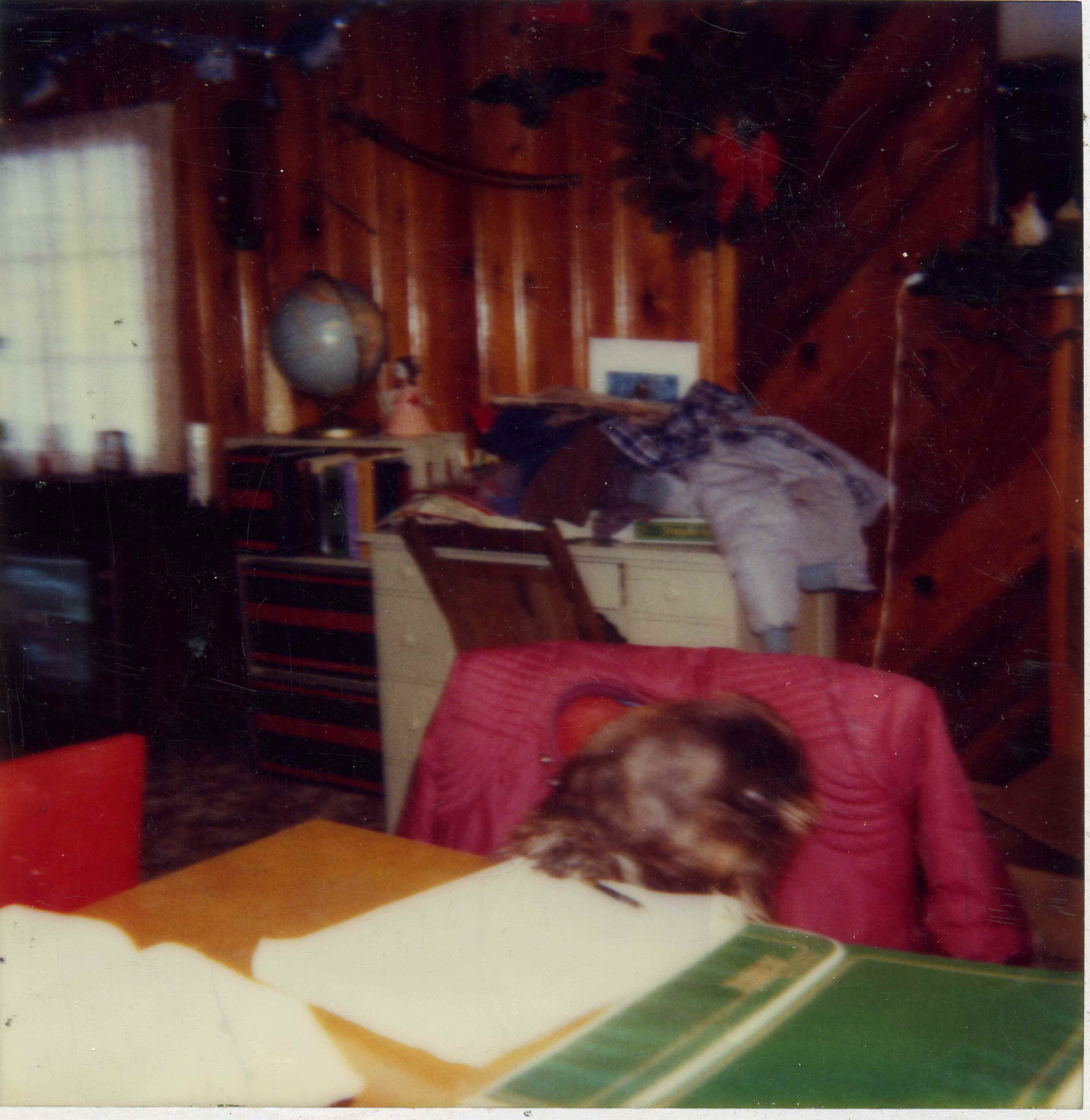 I staged a number of photographs to depict the intelligence of our little Pekingese. In this particular photo, I had set the table with my brother’s homework and a pencil. I then propped the dog in the chair with her paws on the table. By the time I’d gotten around the table, Cricket had changed her mind and was leaving for more comfortable places when I snapped the photograph.

But twenty years later, the photo has triggered more than the simple memory of its taking.

In 1985, we lived in a mobile home in a small town that was not yet a suburb of St. Louis, Missouri. The interior of the mobile home, I can attest with certainty now, was dark wood paneling, with a change in the orientation—vertical versus slanted—to delineate the end of the dining room and the living room. Cricket is pushing herself away from a square dining room table, which means that in December 1985 we had yet to scavenge a larger table abandoned by the owners of the trailer next door when they moved their trailer elsewhere. A puppy would gnaw the legs of that yet-unowned table in his teething phase of his brief stay with us in 1986; in the 2000s, we bring that table from the basement for holiday meals and hide those gnaw marks with long table cloths.

Behind Cricket, a grey student desk bears a pile of coats and other materiel of youth. My mother, upon reviewing the photo, noticed that a friend’s coat was atop the pile and subsequently grounded us for having friends over when she was at work. She had painted that desk, a hand-me-down from our aunt, when we lived in town homes in Milwaukee; the city provided paint to redo the doors in the apartment, and my mother put the remainder to her own use. The desk doesn’t have a computer upon it, the last time a desk in the Noggle household would not hold a computer. That Christmas, our mother surprised us with a Commodore 128. Somehow I turned that gift into a computer-based career, but when this picture was taken, I was only mooning over color inserts in the Sunday papers.

A grey bookshelf stands beside the desk. In the same time she painted the desk, my mother created a very basic bookshelf with a set of 2” x 3” strips of wood. Even then, in the 1970s, I liked books, and she gave me a place to put them. In the photo, the bookshelves hold a set of encyclopedias, also recycled from my aunt and cousins. Back in those pre-Internet days, parents who wanted their children to compete in the global marketplace spent hundreds or thousands of dollars for these multi-volume compendia of brief articles on all human knowledge. My brother and I spent afternoons browsing them, finding interesting topics and then following the twentieth-century equivalent of a hyperlink, the See also reference, to more knowledge. Now, the encyclopedia like those concrete examples of the genre, have faded to obsolescence.

The other room furnishings whisper elements of my childhood and our familial history. A plastic-framed mirror and a matching plastic shelf, hanging just beside the door that’s out of the frame, came from a period where my mother helped a friend with the whole home decorating party shtick. For her help, my mother received a number of the brand’s overstock and sample items, so our trailer was done in Home Interiors. Cheek-to-jowl with the bookshelf, a wood-framed console television set is on. We had a videocassette recorder and cable television, which helped us wile away the time we spent in that trailer while grounded for having friends over while my mother was working or in those seemingly inexhaustible periods of summertime youth boredom.

With the homework on the table, my brother’s green Trapper Keeper lies to Cricket’s left. In 1985, the relatively expensive binder and its loose leaf rings and interior folders were fading from the status symbol they’d been some years before, which explains how we could afford them and how little good they did with our standing in the social order at North Jefferson Middle School or Murphy Elementary School. Still, we carried them to school daily. Mine was blue, and it’s in my office closet even now, holding notes and papers from my high school and early college years.

A burgundy coat hangs on the back of the chair from which Cricket flees; this is my brother’s coat from the late elementary/early middle school era. I had a blue coat in the same style, as our relations often bought near-matching articles of clothing for us as gifts when they were feeling benevolent; when they felt malevolent, they bought us matching articles. I have some other pictures of my brother wearing this jacket, outside my great aunts’ (Meta and Laura) house. He posed on a brick barbecue that my aunt (Dale) removed when she inherited the house. The photo’s memories link to other photographs and their attendant memories in the collage of my past.

Someone in the printing or publishing industry once said that a picture was worth a thousand words, but he was talking about the dramatic impact a well-placed and created image could have on influencing the public at large. Sometimes, though, a small, blurry photograph, poorly lit and composed hastily by a child, can be worth much more than that when it comes to re-revealing the important, unremembered parts of our lives.