I really didn’t know my paternal grandfather well. Well, at all. He died when I was four or five years old (cancer, natch). But I have a record of marches that once belonged to him that’s a personal relic. Not so much because it was his, but because of when we got it.

When we were kids in high school, particularly in the early high school years when we lived in a trailer in Murphy, Missouri, the remainder of my grandparents’ generation died out in short order. Within two or three years, it seemed, my mother’s three aunts passed away and my grandmother died (cancer, natch). When my grandmother passed away, my mother got some of her effects, including a large number of records that grace my parlor now and a great console radio and record player.

She put the record player in the dining room of the mobile home, the largest piece of wall without a major piece of furniture in it. Dining room is a misnomer, really, since the living room and dining room were separated by only a change in the paneling (if you’re following along with the blog, the stereo was on the opposite wall than the one depicted in this photo). She put the collection of record collections on the lowest shelf of a set of 1970s era wooden screw-together shelving that dominated our living rooms from the 1970s and later the basement bedroom I occupied until I moved out.

But this single record, a collection of marches, was on or in the console record player. 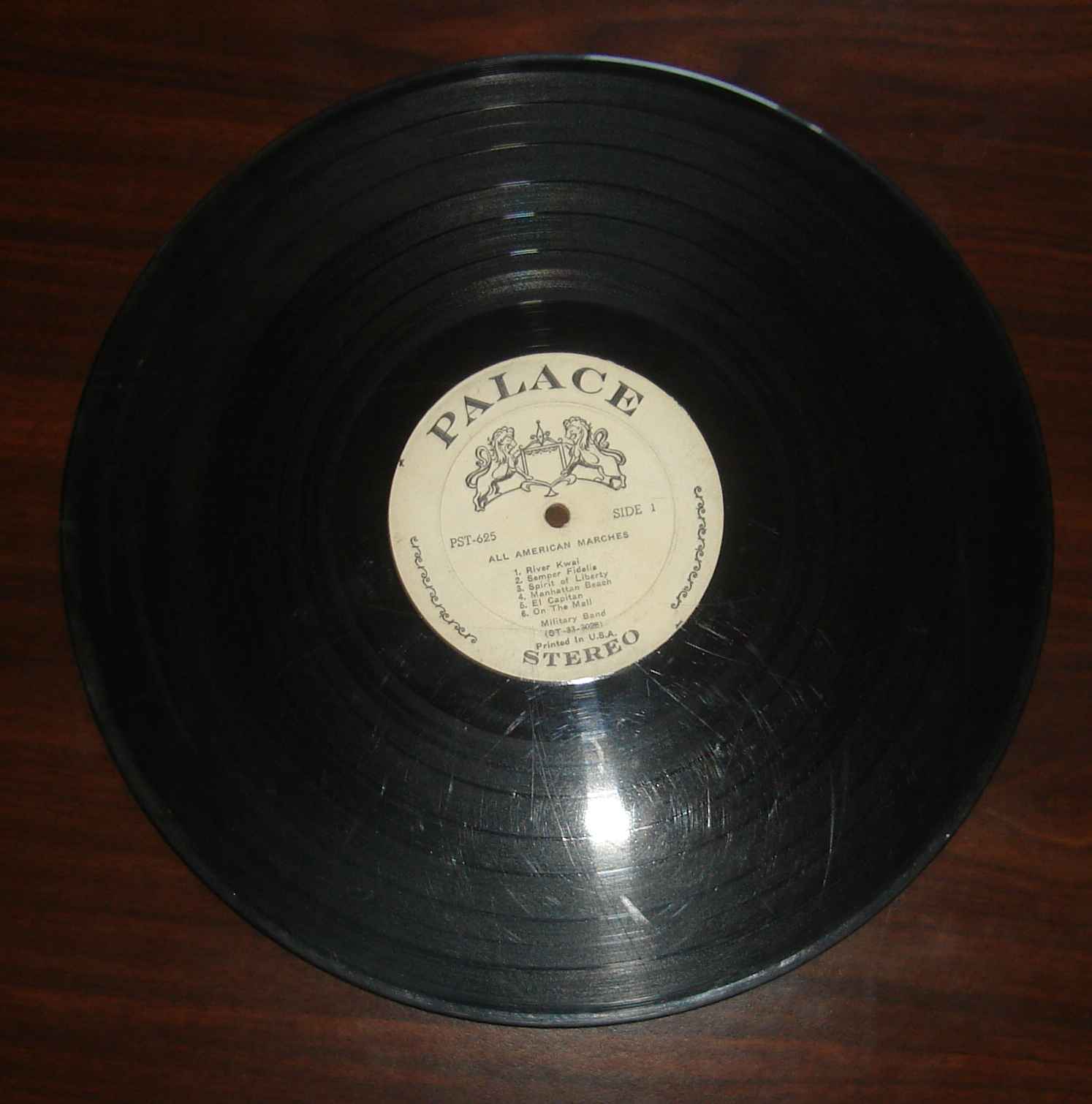 It was a tradition for my brother and I to play this record, or at least the first song “River Kwai”, before walking to the edge of the trailer park for our school buses in the morning. My mother left far earlier to get to her job in North St. Louis, so we boys would serve ourselves breakfast and let ourselves out. We’d then walk five or six blocks of mobile home park (block lengths were two hundred feet or less, roughly two mobile homes laid end to end and separated by small strips of grass) to the bus stop, where we’d be subject to the torment of the hooter cliques that dominated the trailer parks. Hooter was the Northwest R-1 slang for stoners. I’ve never heard it anywhere else.

We must have heard the song in some commercial or something; I forget for what product, but the song was familiar enough to hook us, with its youthful whistling and upbeat tempo. It helped us steel ourselves and prepare for the school days at North Jefferson and Murphy Elementary.

Actually, “tradition” is a misnomer. After my grandmother died, we were in the mobile home for about a year, so we would only have had nine months of school days to listen to it. Minus winter days, when we’d listen to KMOX for school closings. And maybe it wasn’t something we did every morning, but only something I did for a week or so.

But the River Kwai march hearkens me back to those days in a way that my own self-directed memory cannot.

So now that I have the record player set up in the parlor at Nogglestead and the record at hand, I’ve tried to play it a couple of times for my children before they go to school. They’re not particularly impressed by their father’s self-conscious attempt to build a tradition that spans generations and memories for them.

Instead, they seem to prefer the Fletch soundtrack, whose first side I play for them as they’re waking up in the morning.

Someday, they’ll unbox that particular album and remember our mornings and breakfasts together at Nogglestead.

Somehow, I’m nostalgic for that future memory, even though I’m still living it.