Today, I received four CDs that I ordered at the beginning of May, but I don’t think I’ll be putting them in my computer to rip them. 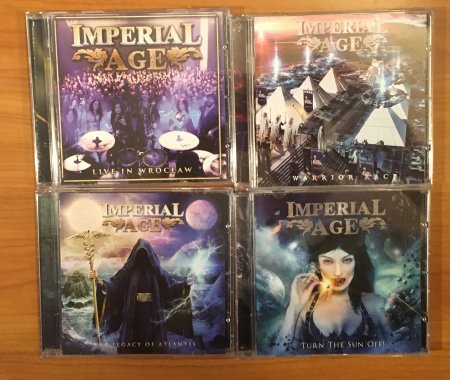 I ordered these CDs from the band’s Web site, signed, and then I got to thinking. Because Imperial Age is a Russian band, these are Russian CDs, so I’m not sure I want to put them into my computer. Or near it for that matter.

In May, I didn’t actually count these albums probably because I did not get them yet, but my balance was way out of alignment with 12 metal albums to 1 jazz songbird album.

So what have I gotten since?

So I haven’t gone crazy on the buying in the last two months, and it’s kind of even. Well, four jazz songbird to five metal band CDs.

I did preorder the new 10 Years album, and I see that Unleash The Archers and Amaranthe have new CDs dropping this fall. So it looks as though my balance might be out of whack the rest of the year as well. If only I could get to the gym.