My current painting-the-fence hat is a green hat that I picked up on my first trip to the Bay Area in the first part of this century and now marks me retconned as a white supremacist along with the old timey naturalist. 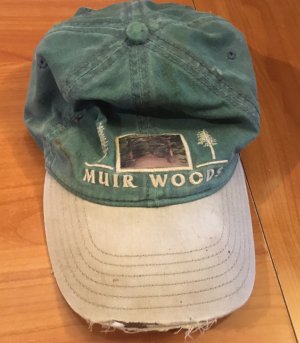 We went for a hike at Muir Woods, and I didn’t pack a ball cap, so I had to buy one in the gift shop before I would go into the woods because one wears a hat in the woods to keep the ticks out of one’s hair. Although “one” does not include my beautiful wife, as she is hatless in the photos.

It does explain why many of my ball caps actually have the name of places where we hiked, though. My current running cap says Big Cedar Lodge on it, and my newest and hence most Formal Dressing Cap says Dogwood Canyon Nature Park on it since I forgot to toss my Big Cedar cap in the truck when we went to Branson this summer.

Also, in twenty years, when the animal rights people have had their druthers for a decade or so, Dogwood Canyon will mark me as a Dog Supremcist even though I have owned cats for a long time, most likely.