I didn’t always used to be a talentless Internet blogging hack. Once, I was somebody. Once, I was a middle school student with a Kodak winner camera laden with 110 film. And I won prestigious awards. Or I won an award. 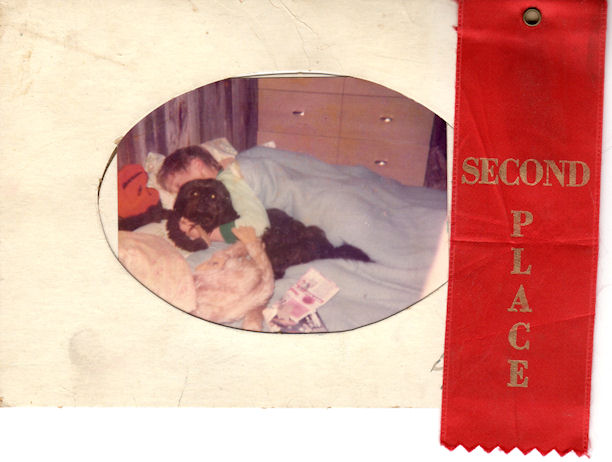 I won second place in the North Jefferson Middle School Art Show for that picture. It depicts my brother sleeping with his arm around our dog at the time, Cricket. Cricket lasted from those middle school years until the year after I graduated college. In other words, she was always there in the latter half of my childhood.

The picture was taken a year or so before the show; that bedroom is in the basement of my aunt’s house in St. Charles, where we lived for a year and a half after our mother moved us from Milwaukee to Misery, as we called it then.

Note the innovative wainscoting. My aunt bought a bunch of fence pickets and let them sun bleach for a while before putting them over the plastered basement walls.

Note the blonde-veneered bureau behind my brother. That had been part of my parents’ bedroom set in Wisconsin, pre-divorce. Aside from the dining room table and chairs, that bureau and its smaller dresser might have been the only matched furniture they owned. My mother let me have it when I moved out of her basement at age 25, so I still have that bureau in my bedroom today, with the scars from a puppy we would own a year after this photo was taken. My wife hates it, of course, and looks forward to a day when we own matched bedroom furniture. Last I saw, the matching dresser remained in the basement of my mother’s last house, laden with blankets and other clothes she bought at garage sales and probably never wore.

The yellow thing with a felt paw on my brother’s arm is a monkey puppet that my mother took to a bar once or twice when she got a chance to go out, post-divorce, in Milwaukee. When I turned nine or ten, I got one like it except brown, and I named it Mark. I think I disposed of Mark only a year or so back. In his 25 years, he lost an eye, his tongue, his nose, and had a tear in his abdomen.

The inverted smiley face is an orange pillow someone gave my brother. We never really liked it, but we carried it along and it was on the bed we shared in tht basement.

At any rate, I had no real artistic talent, but I did have pictures from that Kodak camera to enter into the art show. And I won second place.

But as I’ve said before, when you look at old pictures from familiar environments, most memories are not stoked by the foreground but by the background.