The last time, it was with Larry the Cable Guy talking about unloading the bed of your pickup truck by opening the tailgate, going fast in reverse, and hitting the brakes. Although in my defense, I was merely emptying an accumulation of water and leaves.

This, from Jeff Foxworthy’s book No Shirt, No Shoes…No Problem!:

In the living room we had the telephone wire spool for the coffee table. Saw it sitting off the side of a road, borrowed a pickup truck, and hauled it home. Some people shellac them, others like the natural pitted, tar-smeared look. We painted ours the only colors we could find in Dex’s dad’s garage: aqua and black. That went well with the green-gold shag carpet and the orange sofa. The spool top was always cluttered with the remains of a wild Saturday night, usually from three months earlier.

In my defense, my spool was classily covered in red shag carpet and served as my entertainment center: 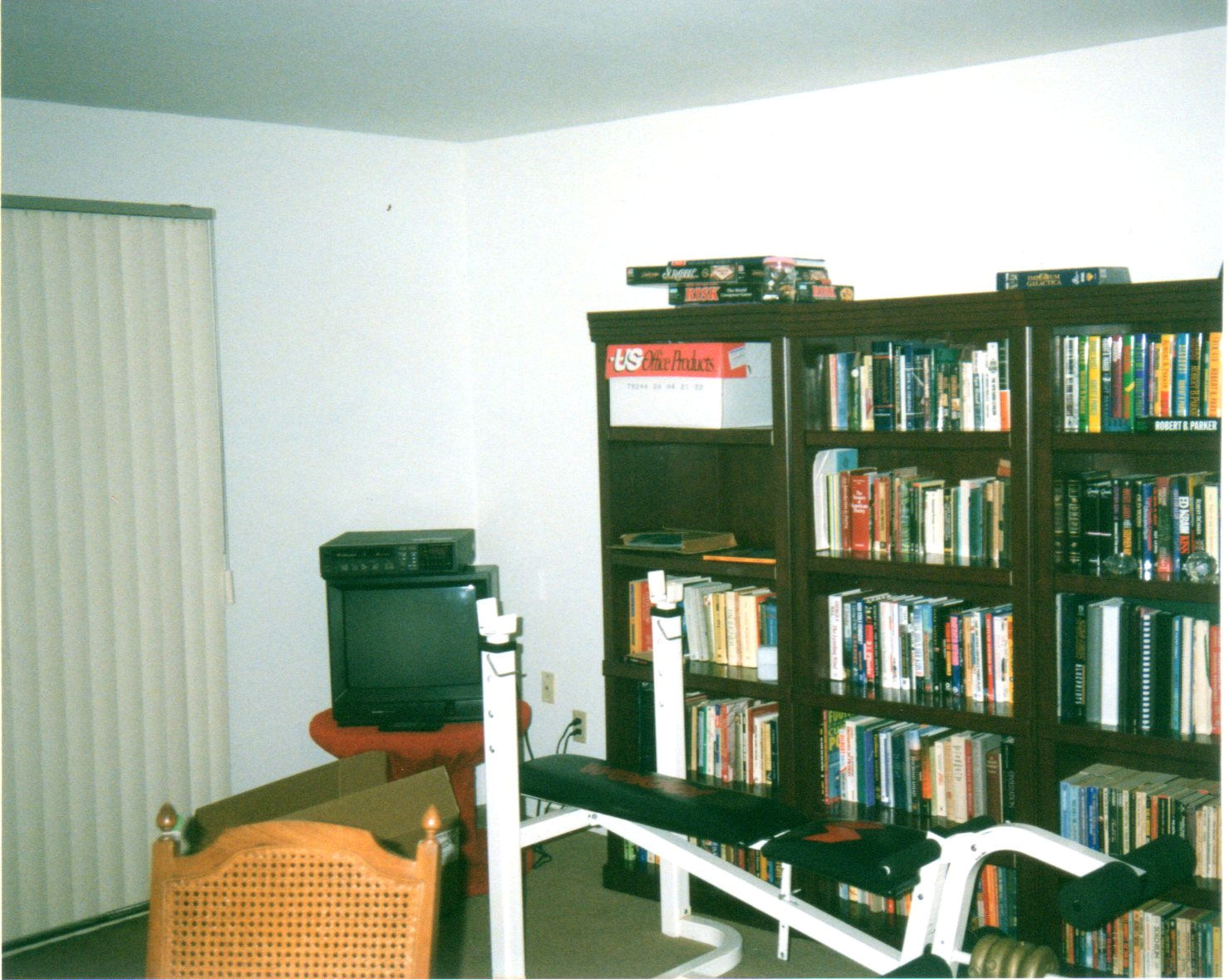 Damn, Brian! you say. You have a degree from a prestigious, they tell you, private university! How did you come to have a wire spool table?

Okay, as you know, I used to live in a trailer park in Murphy, Missouri, in the smallest, most run-down trailer there, a 1968 Star trailer that measured 12′ by 60′ and could not actually be moved because it was not sturdy enough to move. Across the street, between the Torrances and Mr. Matlock, whom the FBI interviewed when my mother was obtaining security clearance and promptly tipped her off so we could run for it if we needed to, lived Cathy T. You in the suburban crowd might not realize this, but there are single wide trailers and there are double-wide trailers, but there’s also a class of trailer where additional rooms pop out of the sides, kinda like a one-and-a-half wide trailers. Cathy lived in one of those with a fancy sunken living room. You went up the stairs to get to the door and stepped down a step into her living room. Swank.

At some point, Cathy became a real estate agent, and that point coincided with my mother coming into some money and wanting to buy a house. So Cathy ended up acting as my mother’s agent when my mother bought our house in House Springs, Missouri. Well, outside of House Springs, down the two-lane county highway MM most of the way to Otto, and then down off Heads Creek Road onto Ruth Drive/Rural Route 5. A house in a valley with a gravel road and supplied by a telephone party line. In 1987. We finally got a private telephone line when the cable company paid part of it to string their cable, too.

Because we were looking to fill a 4-bedroom house on something like 3 acres (half wooded, with a creek and a dump on it) with the furniture from a small mobile home, Cathy gave us the wire spool table. It served as my night table through my remaining years of high school and when I returned to live first in my old bedroom and then in my mother’s sun room and basement (after she sold that house, but before she got separated from her government job when they moved it to Alabama).

And when I moved out into the apartment of my own, it came with me, of course, since at that time, all I owned was a weight bench, a bed, three bookcases (!), a blonde-laminate bureau, a dog-gnawed dining room table with four mismatched chairs, a television, a VCR, and a small desk.

What happened to the wire spool? The same thing that happens to a number of them: Their owners got married. I thought it was a functional piece of furniture, but women sometimes value appearance over functionality or disvalue appearance enough to override functionality. It might have gone back into my mother’s basement; I seem to recall it eventually being discarded because a dog soiled its shag, but I couldn’t tell you for sure. That story, apparently, is not old enough for me to remember clearly.

Regardless, I get to check off a number of things on the Redneck list:

5 thoughts on “Wherein My Life Intersects, Again, With The Humor Of Jeff Foxworthy And Larry The Cable Guy”