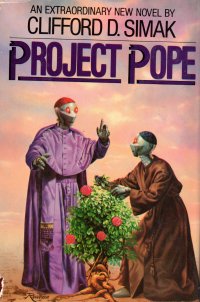 After I listened to Augustine: Philosopher and Saint, I thought about picking up some of the primary texts I have lying around. Instead, I picked up this science fiction book because it was on the shelves where I thought I had last seen the Augustine, and it has a little bit of religious theme to it. So almost the same.

In it, a doctor on the run joins a journalist on a trip to End of Nothing, a planet way out of the way that features Vatican-17, a research center/church built by robots a thousand years ago where they find room for themselves amongst the human partners in the endeavor. The robots, inspired by their human creators, are looking for one true faith and have created a super computer they call the Pope to crunch the data provided by many alien races and human “listeners” who are mystics or projectors who travel to other places outside their bodies. Over the centuries, factions have developed between those who favor promulgating the faith and those who seek knowledge as the stepping stone to true faith.

When one of the listeners visits “Heaven”–a location that matches common but not biblical depictions of heaven–everything comes to a head as the rival factions vie for power.

You know, when I read classical science fiction–not the modern stuff, and not so much the late Cold War US vs the Soviets in Space–I experience a sense of wonder that I don’t get from other genre fiction, including fantasy. Anything can happen, and I feel transported in a way I don’t with men’s adventure paperbacks, thrillers, or even historical fiction or literature. So I should really read more science fiction–it’s not as though I lack it on my shelves–but somehow I end up grabbing a different kind of book, and I lose that sense of wonder.

Perhaps I should read more science fiction. Please, someone, remind me of this in a week or so.

I haven’t read much Simak (City and Mastodonia in the last decade), but he’s a fallen Wisconsin boy (fallen because he was born in Wisconsin but ended up in Minneapolis). In researching this post, I did learn that I bought twp copies of Mastodonia over the years (one in October 2010 and another a year later in October 2011). So I’ll have to be careful not to pluck the second copy from my shelves in 2029 and read it again. Because, by that time, I expect to have about 20% more books on my to-read shelves than I do now. Please, someone, if you see me picking Mastodonia up again, remind me.