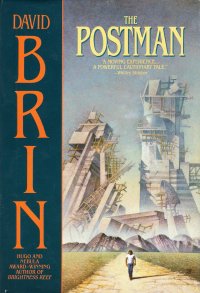 Hey, who’s in the mood for a post-apocalyptic book? And the apocalypse I’m talking about is not the middle 1990s collapse in Kevin Costner’s career after the twin post-apocalyptic Waterworld and The Postman (which I rented and watched on the same night in the 1990s, gentle reader).

Twenty years (roughly) after a series of calamities (EMPs, bio-warfare, nuclear winter, and insurrection by augmented former soldiers and survivalists), a traveling troubador performs remembered bits from pre-collapse plays, television shows, and commercials in scattered communities for food and shelter as he wanders westward from Montana seeking some semblance of civilization. After he’s robbed of his supplies, he tries to track the thieving band of survivalists but instead stumbles upon a mail truck with a decades-dead postal carrier inside.

Donning the uniform and coat, Gordon reaches a settlement, and they think he’s actually a postal worker, so he invents a story about the Restored United States of America based in St. Paul that is sending out emissaries to set up post offices. He uses this con to survive and delivers actual letters written by townspeople to other towns, eventually actually setting up a post office system. He settles in a prosperous community held together by the myth of an all-knowing supercomputer and tries to get them to train up before the augmented former soldiers march on their homeland and impose a brutal fuedalism on it.

The plot differs from the film quite a bit, as they couldn’t fit whole elements, subplots, and side quests from the book into a single two or three hour film. Although I don’t remember the film that well–I might have actually seen it in the last 20 years–I didn’t dislike it as much as the Clinton-era critics did.

The book was a pleasant enough read for the most part, but wandered a bit and then jumped into an ending that seemed a little rushed. But, overall, pretty good. Not as wide-open in possibilities as a pure mid-century science fiction novel like Project Pope, but that is to be expected.