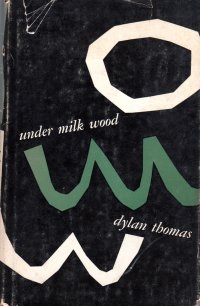 I just read Thomas’s short story Holiday Memory, but upon checking my notes (this blog), I see that just read was almost five years ago. Tempus fuhgeddaboudit.

This is called “A Play for Voices,” which probably means a radio drama more than a stage play. The cast of characters indicates why: There are 63 named “voices” in the play. Apparently, this drama debuted as a staged reading in New York City with six people (including Thomas) doing all the voices. It must have been confusing to watch and keep up with it without the names above the spoken words, as several voices (Drowned One, Drowned Two, and so on) appear, say their line, and then disappear for half of the play only to reappear later. In context, you can kind of figure out who they are–they’re more types than real characters–but to see this on stage with only six people doing five voices each would have been underwhelming.

At any rate, the drama is a limited omniscient slice-of-life day of a small town where not much happens. You look into the minds of lovers, husbands and wives, the clergyman, and a variety of other characters as they go through their day. And CUT!

I mean, there’s no plot to speak of; we get some characterizations of the various characters, but it’s just a day in their lives.

The words are poetic and would be pleasant to listen to, but the “play” lacks any drive or development beyond its presentation of this day in the life. So it, too, underwhelmed me.

I’m going to start an idle speculation about the evolution of drama. In the old days, like 1592, you read a lot of drama about heroic characters (or tragic ones), kings and princes and whatnot, but in the 20th century, is there a shift to more working people and common people as protagonists (as it were)? Does this reflect a shift in the audience–from common people seeing heroic stories to academic and upper class people watching stories about distant lives of the common folk? I suppose I could write an academic paper or a book making that argument and throw in how today’s commoners flock to movies about outsized heroes. Were I so inclined and not so lazy.

At any rate, worth a read if you’re into Thomasania.

This completes my reading of the four books I bought at ABC Books this month. I thought about going up on Saturday to buy more, but I decided that I have enough to read for now. If they have an author signing next week, however….