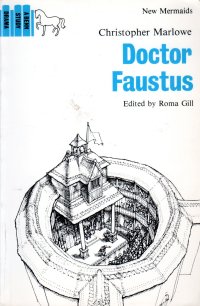 This is the third of four books I bought at ABC Books earlier this month that I have read in this, the same month I bought them. What a triumph it will be to return to the place of purchase and announce that I’ve read all the books I bought the last time I was in! Which will not, really, be much of a triumph at all, and I’m the only one who will take any delight in it at all.

At any rate, you probably know the story of Dr. Faust by now: A learned medieval philosopher/scientist reaches what he thinks are the limits of knowledge through traditional learning, consults with some sorcerors, and makes a pact with the devil. In exchange for his soul, he gets 24 years of magickal supremacy. Although he starts out with grand dreams of power and what he’s going to do with them, over time it turns out he does not much, and then the devil claims his soul.

I’ve seen an operatic performance of the story (not this story) where Faust is redeemed in the end, but that’s not how it happens in this story.

So the story is an archetype we see re-written today, but it can also be seen as a comment on man’s condition in the world, where man becomes earthly and fritters away what powers he has whilst in the world. Or maybe I’m just getting middle aged and seeing signs of how I’m puttering my way through my life and I’m seeing that as a storyline where it’s not.

Regardless, it’s a play in blank verse. A long introduction talks about variations between the texts and relates the work to contemporary other works by Marlowe and Shakespeare, but I skipped this until after I read the text itself. I have hammered home again and again how I prefer to do this because the scholarly professor’s intercession on your unlearned behalf often kills or at least mutes the desire to read something.

The play itself is 90 pages of text, but sometimes a third of that is given to footnotes explaining things that someone with an English degree (or at least one that steeps the undergrad in Shakespeare, Jonson, and Chaucer) is going to know anyway and differences between the A and B text. So it’s a quicker read than that.

I enjoyed it, and I enjoy being able to say I’ve read it. A two-fer.

I think I have Goethe’s work around here somewhere. Perhaps I’ll pick it up sooner rather than later for a compare and contrast. If I remember, and if I find it.