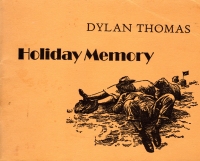 This book is a little chapbook containing a single ‘story’ from Welsh poet Dylan Thomas. It’s part of a series, and this ‘story’ first appeared in another volume, so I’m not sure why this appears in a slim chapbook edition twenty years after Thomas’s death.

At any rate, “Holiday Memory” is not so much a story as a stream-of-consciousness prose poem about being on vacation on the seashore in Wales in August of probably the late twenties or early thirties. Jeez, I’m going to have to start adding nineteen to the decades now, ainna? It’s a colorful, vivid recounting and a pleasant read, although there’s no plot to drive one along. It’s a pretty short work, though, so you don’t have far to go from morning to the beach and night at the fair.

Worth a look if you’re into this sort of thing as I am.