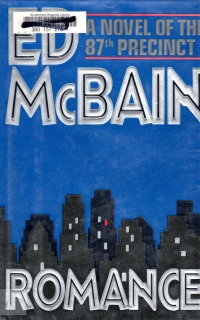 It’s been three years almost since I read an Ed McBain book (Doll in April 2012). It’s hard to believe because they were such a staple of my early adulthood, but he was producing new books at a rate of one or two a year until his death in 2005, and I had a source of new books to read then. By now, I’ve been through most of them more than once, and any reading is likely to be re-reading.

As is the case with this book.

An actress reports threats as she rehearses a play about an actress getting stabbed. Then she gets stabbed for real, superficially, which leads the detectives of the 87th Precinct, in particular Carella and Kling, to investigate. It turns out to have been a stunt cooked up by the actress and her lover/agent, but someone really stabs the actress good and dead, which complicates things.

The book makes good use of the play within the play trope (wrapping it in a novel–Ed McBain was nothing if not novel and clever as a writer). It has some series business in it–Kling is starting a new relationship with a deputy chief who is black–and some of the characters only make walk on appearances (although Ollie Weeks appears, and I’m not sure why McBain focused so much on him at this point in his, McBain’s, career). The beginning of the relationship–the first dates and whatnot–give McBain an opportunity to explore The Race Question especially in terms of personal relationships. Some of McBain’s books have crime-based subplots, but this one only has the one crime plot and the relationship plot. So it reads a little like an episode in a television series.

Which is what you expect when you’re picking up one of these books after having read others. And it’s not a bad thing. And McBain is an excellent writer in the genre. So it’s worth reading more than once.