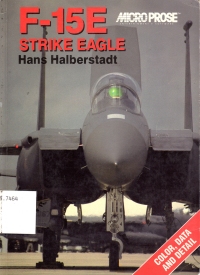 This book is badged by Microprose, which you old timers will recognize as the company behind military simulators such as F-15 Strike Eagle and Gunship (as well as the original Civilization). 1991 is near the end of its run as an independent game company (according to Wikipedia, so it’s possible they’re branching out into other revenue streams to create synergy at this point.

The book is primarily a photography book, with lots of images of the F-15E Eagle’s exterior and cockpit with a bit of text describing it, its history, and its recent successes in the Gulf War. If you’re a regular reader of Jane’s Defense Weekly, this stuff is old hat. But if you’re old timey like me and remember Top Gun fondly (which was not the F-15 but the F-14, but you know what I mean), you’ll find a lot to like in this short little book. Plus there’s bits like the fact that they painted over the kill counts on some of these machines as they continued to fly after the action where the saw the combat. Or that the names on the planes are not necessarily the names of the officers in the planes as crews take the available planes, not their plane on missions.

It makes me want to power up my Commodore 64 for another sortie. How come they don’t make good flight simulators any more? Oh, yeah: 9/11.