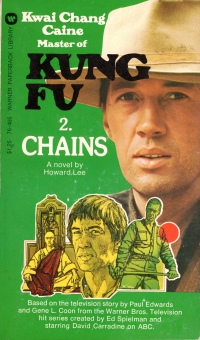 This book finds Caine in the mountains, looking for his brother. He encounters some fellows who don’t like Chinamen and calmly dissuades them from attacking him and then walks into a local fort to inquire about his brother and to talk to an accused murderer who shared a mining claim with his brother. The murderer is accused of killing one of the other mining claim partners. Of course, the guys in the fort recognize Caine as a wanted man and shackle him to the accused murderer. These are the physical chains of the title.

The duo escape and try to make for the mining camp to find out what happened to the other partners, including Caine’s brother. Along the way, they encounter hostile Indians, a trapper who doesn’t like Caine’s chainmate and the sister of another partner in the mining claim and her tenderfoot husband, and the fellows from the opening reappear with hostile intent.

The story moves along more linearly than the first volume of the series and more like a teleplay. It’s a quick and engaging read and lightly heady enough with traces of lightweight Buddhist thought to make one think a bit and compare some of the tenets to Stoic thought if one happens to be reading both at the same time. So better than a lot of men’s adventure novels.