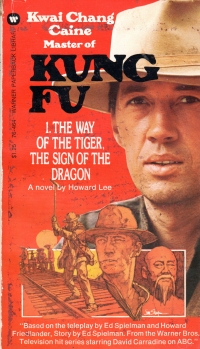 This book is one of several books tied into the original Kung Fu television series from the 1970s, in which a half-American Shaolin priest with a bounty on his head wanders the west having adventures. It ran for a couple of years and then ran in syndication for far longer (ask your dad what “syndication” is). Then, in the early 1990s, a spin-off appeared featuring the grandson and great-grandson of the original character, and that series played for longer than the original. I think I saw more segments and/or episodes of the spin-off than the original. So I didn’t come to the book with an existing love for the characters or story.

The book starts much like a pilot of the television series; in a series of flashbacks, Caine’s training is revealed and the events leading to his exile from China and the bounty on his head. In the present day of the book, which is the old West, Caine is fitting in with a bunch of railroad building Chinese immigrants driven by a harsh and murderous foreman who insists upon following the exact route planned for the railroad even though the company’s pesky geologist predicts disaster in blasting through mountains. When the disaster occurs, the Chinese rise up and only Caine can protect them from slaughter at the hands of the railroad guards.

It’s a short paperback, but it’s not as quick a read as could be expected. There is little dialogue, and there are stretches of paragraphs or pages of unnecessary musing–I guess this is the character development. The flashbacks aren’t problematic, though, and if you’re not familiar with the television series, they do provide a bit of parallel tension as his training unfolds.

I’ve got a bunch more of these paperbacks, and I’ll read them by and by. It did interest me in looking up the television series, but it doesn’t look like it’s free on Amazon Prime, so I won’t rush out to buy the DVDs for them. But the book is working its marketing and synergy magic, albeit forty years later.