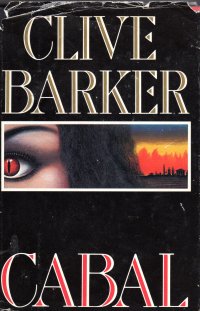 Clive Barker was all that in the late 1980s. He had a couple of movies out, including Hellraiser and, um, what’s that other one?

Well, this book collects a novella and several short stories. The novella, “Cabal”, talks about the Nightbreed. Ah, there it is!

At any rate, this book has on the outside edge of my to-read shelves since I cleaned up my library (::cough, cough:: three years ago). I read Barker’s Books of Blood (I, but that was before they needed Roman numerals) in 1994, and I’ve picked up a couple of his books here and there because every once and again, I think I’ll read some horror and maybe write some (which tends to come out more like H.P. Lovecraft than Stephen King or one of the modern Urban Fantasy people).

I mean, they’re okay stories, a bit gory as expected and with a touch of S&M (graphic at times) that spawned more than one Goth in the 1990s.

So perhaps I’ll read a couple more of these 1980s horror books that I’ve accummulated over the years. Back then, horror books (as with so many other books) were thinner, running 200 or 250 pages (this volume is 338, but broken over multiple stories, it seemed shorter), and horror books must have been fairly popular in book clubs, as you can see bunches of them available at book sales. For a little while, yet. I have to wonder if they’ll all disappear soon as the baby boomers finish downsizing and if another burst of availability will occur when the readers of Generation X start downsizing.