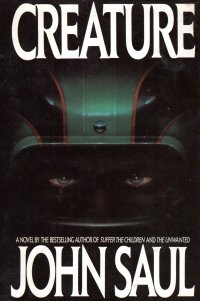 After reading Cabal, I thought maybe I’d knock out a couple of the 80s-era horror books I have around. I have a couple from John Saul, so I picked up this one. Who knew that it might actually be the next in alphabetical order?

At any rate, the plot is that a nuclear family moves to a small company town in the Rockies when the father gets a promotion at the tech company he works for. They find the town idyllic, but it’s controlled almost top-down by the tech company. The local football team has boys that are bigger and meaner than other nearby schools, and it’s because the local “sports” clinic, funded by the tech company, is conducting experimental treatments on the boys. It makes them bigger and stronger, but sometimes makes them feral. Of course, the gentle son of our nuclear family decides abruptly that he wants to become stronger and so he falls under the influence of the doctor running the clinic. When some of the mothers of the affected children start wondering if their children are in danger, the tech company and the fathers align to protect the program and the company.

So it’s got a children in danger theme to it that seems fairly common to the genre, and it has helpless wives who lack the power to get their children out of danger. It reminded me a lot of The Stepford Wives in that regard. It got under my skin a bit–I cannot imagine any of my mother’s sisters or my mother dealing with the issues as the mothers in this book do. And they all lack a support network outside the town, so nobody calls a sister or friend for a sanity check. Stephen King’s books often featured isolated locations, but it doesn’t seem forced. Here, it is.

The book ends very quickly with a burst of violence; it was sudden that I thought right before it that it was leading up to a cliffhanger or a sequel. But no, a little bloodshed and not a complete set of revenge which might have left room for a sequel.

I did flag a bunch of things in this book:

So ultimately, the book really didn’t work for me. I’m not a great fan of the genre, and this book hasn’t made me want to read another any time soon.

In thinking about this book and John Saul’s sort-of ubiquity–you could see his books available back in the day, and they were prevalent at book sales a couple years ago–made me wonder how the collapse of book clubs altered book buying. Book club editions were a staple of the book sales for a long time. I think we might have seen that bubble burst as members of my parents’ generation have downsized their libraries. What am I talking about? Even I don’t know.