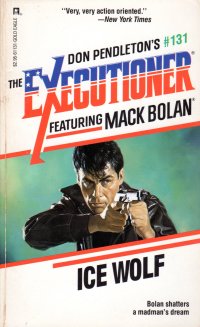 I picked this up right after Creature; the Executioner series is the default for “I’ve just finished a book and need to pick up another, but I don’t want to spend much time picking it.” And it will be for some time to come as I still have 30 on the shelf (not counting the spin-off series like Stony Man or Able Team).

In this book, Bolan is on a security team for a summit between the President and Mikhail Gorbachev in Washington when Leo Turrin tips him to a hit team that is eliminating people in the witness protection program. Bolan prevents this team of trained pros from killing one target and reaches out in his own particular way to a local mob boss who hired the hit team–who reached out to him with the offer. Bolan eventually discovers that the hit team is killing the witnesses as a red herring to distract law enforcement from their real target: the President and Gorbachev. Like so many other fictional antagonists from the 1980s (and, sadly, to this day), they’re Nazis who emerged from a deeply hidden program to take over the world again.

The book weighs in at about 250 pages, a little longer than the pulp entries from early in the series, and they have the makings of an interesting modern (well, 80s) thriller. The big bad Nazi, trained to be a killing machine by his father, might be jeopardizing his mission by hunting for a woman who escaped from his clutches that he must possess; the aforementioned red herring subplot; and infiltration of the security teams by the long-planning Nazis. But ultimately, it’s a couple of set pieces and then the author gets to about page 220 and has to wrap it up with sudden revelations (the woman is his twin sister!) and a climax that is abrupt and we’re done.

So I’m comparing this book to Creature, and I have to say that I’ll remember the plot of Creature better than Ice Wolf in the days to come. I suppose that series books lend themselves to a little bit of this confusion–what plot happened with which title (especially since series titles tend to fit a pattern to increase salability rather than describe elements of the plot). However, I’m sure authors of these series are happy to accept this trade off with profitablity on our behalves.

Which is why I need these posts–so I can keep the plots of books and my thoughts of them clear as the years pass. Although, to be honest, I rarely go back to Executioner titles to see what I had to say about them.