Well, first off, after church, I made a trip to Lowe’s. The 18 volt DeWalt cordless drill I have came with two battery packs, but only one of them continues to work, so I hoped to pick up a couple of spares and another drill that fits them. However, a new standard, 20 Volt, has taken over, so the shop did not offer an 18 volt drill. Instead of buying a couple spare 18 volt packs and a new 20 volt cordless drill, I opted for the spare packs and a cheap corded drill.

Because on Saturday, I’d started working on a project, and I spent a lot of time changing between a drill bit and a screwdriver bit, and I wanted to be able to just switch drills instead of bits.

Which worked out all right.

I’ve built a rudimentary set of shelving for my records:

They’re rough and probably high school shop D-level work, but with a paint job and a bunch of records on them, they’ll do. Given that they’re constructed from (inexpensive) two by fours, this shouldn’t happen again. The fact that they all said STUD while I was working on them was very affirming. And they’re modular, so I can move them around and stack them up and add another tier when it becomes necessary (probably after the next Friends of the Springfield-Greene County book sale in the autumn).

They impressed my beautiful wife, anyway, but she’s not the son of a carpenter. 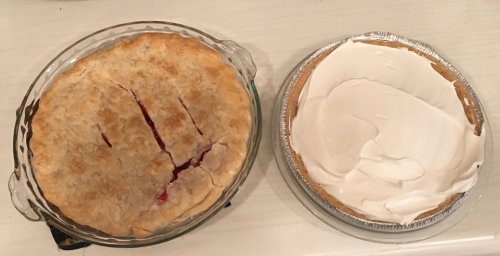 So I’m not sure if I’m operating my masculinity at a deficit here; there are two pies, but does the record shelving count as two or as one? Also, the record shelves are not yet done. I’m going to have to let the Internet judge here.

Also, I did not actually have any pie; my wife prepared pasta for dinner, and I had so much of her delicious Italian cooking that I did not have room for pie. I might make up for it by eating one or the other pie remainders today.