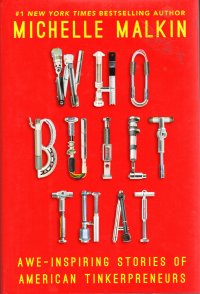 I don’t know where or when I bought this book; it cannot have been too long ago as it’s a book of recent vintage and it was not buried in my to-read shelves. I picked it up to read because I might be going to an event where Malkin is speaking this autumn, and I wanted to be able to say I read one of her books.

At any rate, this book is not a political polemic as one might expect from a political commentator. Although the book piggybacks off of an Obama quote (“You didn’t build that.”), the book focuses on a number of what Malkin calls “tinkerpreneurs”: inventors whose innovations changed our lives, sometimes in ways that seemed small but had big impact. She looks at Carrier and Lyle (air conditioning), the Roebling family (steel cables and suspension bridges), Libbey and Owen (glass), and others. The book looks at how many of them had humble origins (and by humble, I mean nineteenth century origins, which meant they went to work, often in manufacturing, and then improved upon the things they did every day through mehanical automation). No eight year degrees in inventing for them.

So it was an inspiring book. One of my stretch goals for my life is to get a patent for something. Unfortunately, I’ve ended up working in computers, where patents and innovation are squirrelly instead of actually working for a living. So it’s made me want to tinker (where other books make me want to write more).

I just need to clear some space in my garage to get going.