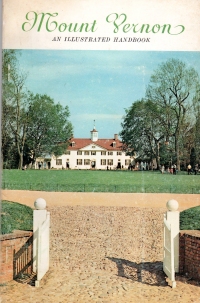 This book is one of those books sold at a historic site to tell you about said historic site, but it’s pretty detailed–flat spine and 114 pages which includes numerous photographs and drawings, of course, but enough text that make this more than a football game browser.

The book also includes the story of how Mount Vernon came to be preserved–in the middle of the eighteenth century, the last owner from Washington’s line wanted to give it to the Federal government or the state of Virginia, but neither took the offer (remember limited government? Ah, what an old notion!). So a group of women formed a society, raised money, and took it on (remember voluntary association for the common good? Ah, what an old notion!).

How’s that working out? All right.

We are proud that Mount Vernon does not accept government funding. We are a 501(c)(3) nonprofit organization and rely solely upon patriotic individuals, foundations, and corporations to help preserve George Washington’s home and to educate visitors from all over the world.

At any rate, the book reminds me how little I really know about the revolutionary war and the late eighteenth century in general. However, the book goes through the building room by room with color photographs, and I realize that the whole thing reminds me of a stage set: You see all the props, but the action and narrative are often missing. I kind of get that, too, when I visit places like the Ray House at the Wilsons Creek National Battlefield or the Hawken House, the center of the Webster Groves Historical Society (of which I am still a member, ten years on). Showing me the things only fills in the gaps when I already know the story. I guess interactive programs and re-enactments have their merit.

So the book not only makes me want to visit Mount Vernon, but I also want to read a biography of George Washington. I think I have one around here somewhere. Only time will tell if my urge to read such a volume intersects with my finding such a book on my bookshelves before my urge to read it ebbs.

So I’m getting pretty close to having completed the books that languished on my sofa side table for years, although I have found on my to-read bookshelves books that I know where also on the side table for several football seasons, so I must have cleared it off without reading the books a year or so ago. Ah, well, perhaps I exaggerate for effect when I said how long these particular books had been there, but blowing through them is making for a healthy annual book count as I continue to trudge through The Count of Monte Cristo and the complete works of Keats and (P.B.) Shelley, not to mention the complete works of Shakespeare that I started last year and set aside a couple plays later.