When we bought Nogglestead, one of the outlets in the corner of the lower level had a Bell Howard Ultrasonic Pest Repeller plugged into it. It was out of the way, so we just left it there. For a very long time. Seven or eight years.

However, we have professional pest control services for bugs and quadrapeds for mice, lizards, and snakes. So about a year ago, when I was plugging or unplugging something from behind the chairs or perhaps doing one of our decennial vacuumings behind the reading chairs, I unplugged it and set it on the bar behind the coffee pot and electric tea kettle. 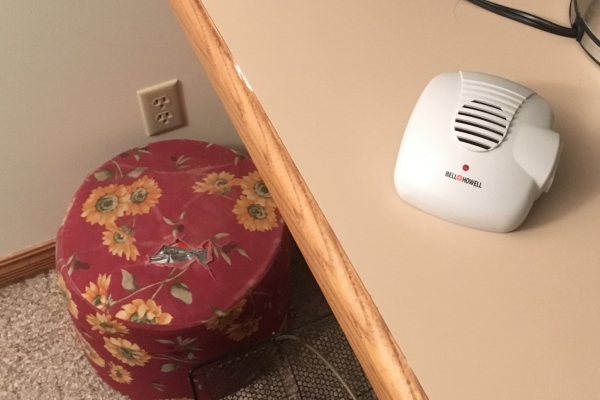 So how long has it sat on the bar back there? Months, if not a year or so. It’s behind the coffee pot, so when I’m at the bar making coffee or feeding/watering the cats, it’s not immediately in sight. And the reading chair (as depicted here, but the pots and the pest repeller are tastefully cropped from the mess) is in such a position as I don’t see the counter from it. So it can rest there comfortably there forever.

I doubted that it served its claimed purpose; the only mouse intrusion we’ve had was when one got in from the garage when we stored the cat food underneath the bar sink–right next to the repeller. The mouse didn’t have to cross any cat-patrolled ground for a snack, and I’ve not seen any other evidence of mice in the house since we’ve moved the cat food to a different cabinet. Nor did it keep out the various snakes, frogs, and lizards that the cats used to find (but they haven’t found in a while, which must mean the new cats are lazier than their predecessors, or the reptiles and amphibians are more cagey).

And I have not seen an uptick since I unplugged it.

So I’m finally trashing it. I’m not sure if this falls under depackratification (probably not, since it was not mine to begin with) or deRooneyfication (probably not, since simply discarding something is not a project). More likely it’s but another example of how, like my sainted mother, I don’t like to rush into anything. Or vacuum behind furniture.

But I hope the rodentia of Greene County do not read this and come over now that the ultrasonic pest repellent is gone. I’d hate to think they’re posting it on Rattit and commenting right now.