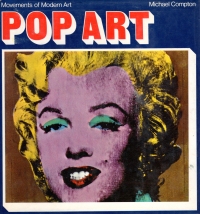 This book is part of the Movements of Modern Art series, so I expect they’re designed to be textbooks. It was not a good book for browsing during football games, as the text to image ratio is quite high. Chapters cover the origins of pop art, subject matter, formal qualities of pop, English pop artists, American pop artists, European artists, and post-pop art, complete with miniature biographies of major artists along with samples of their work. The book also includes little excerpts from magazines and books about pop art from the time when it was new. Which is not all that long before this book appeared.

So what is pop?

Rubbish is what it is.

The book explains that it’s a response to abstract expressionism, which is Jackson Pollack and all that other, earlier rubbish. The pop artists wanted to paint real things, and they often did, except that, instead of painting things as things, they made paintings as things themselves, whereupon the thing depicted was not the point. I would say, “And suddenly, we’re way off into never-neverland” or some such dismissal, but it wasn’t sudden. Blast, what my beloved Impressionists did to art by removing the straight lines.

Were I bothered, I would try to build pop art into a further example of how artists/”elites” in the 20th century fought for the common man by doing their damnedest to ensure that their books/poems/paintings did not speak to people, but instead spoke self-consciously to themselves and fawning critics looking for the newest fad to become an academic expert in. Which means they’re all chasing fads and making fads instead of making something pleasant to look at that tells a story or scene or causes a viewer to actually have an emotional response other than smug reassurance that he’s better than the hoi polloi.

I did flag one bit from one of those reviews I mentioned. It’s from Art News in 1964 by James Rosenquist:

I’m amazed and excited and fascinated about the way things are thrust at us, the way this invisible screen that’s a couple of feet in front of our mind and senses is attacked by radio and television and visual communications, through things larger than life, the impact of things thrown at us, at such a speed and with such a force that painting and the attitudes toward painting and communication throught dowing a painting now seems very old fashioned….

Just wait about fifty years and see where we are. It’s no surprise, then, that a number of the “artists” in the book flirted with other media, including films and “novels” and, earlier, environments and “Happenings.” Because they were chasing acclaim and fads.

You know, I prefer painted treasures like these; anything I would like from the 20th or 21st centuries is probably kitsch by Real Artists circa 2019, but the more I see in books like this and in art museums run by Serious Art Apprecianatos, the more I’m fine with that. I’ve got three H. Hargroves on my walls and prefer Bob Ross or Thomas Kinkade to Warhol, Lichtenstein, or the other parade of forgotten pop artists in this book.

So, let me tell you how I really feel.