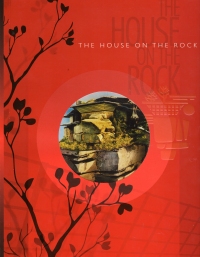 This book is a picture book sold at the House on the Rock to help you remember your visit. It does more than that, actually, as the photographers used lights in taking the pictures. You can actually see the rooms.

For those of you who haven’t seen it, the House on the Rock is a domicile of sorts built by a man atop a sandstone column starting in the 1950s. The original house stands atop the column, but over the decades between then and now, the fellow (Alex Jordan) and the people he picked to maintain the building have continued adding to it. So the flavor is something between (I would presume) the Winchester House and Hearst Castle. The original house is now surrounded by gardens, other buildings, and a museum dedicated to Alex Jordan, so it’s not clear to the casual visitor that the house is on a rock at all.

But back to this book: It’s a tourist hagiography of the facility and a bit of Alex Jordan, so don’t expect any depth or criticism. Instead, it goes on in marketingese about the various collections and oddities that the attaction houses, which is useful, since one should expect to be overwhelmed when visiting the place in person. It took us almost four hours to go through all the stuff at a pretty consistent pace throughout, without dithering or lingering on anything in particular.

The images in the book are brighter and clearer than the underlit interior of most of the actual House on the Rock itself which has a definite cave feel. Whether they do this to spotlight different things in each room or just to save money on lighting, I don’t know; however, the images are better than the real thing in the areas that they depict.

At any rate, it’s worth a look if you find the book at a book sale. It might not be worth the $20 they charge for it (shrinkwrapped, so you can’t see its contents until you’ve ponied up the dough) at the gift shop.