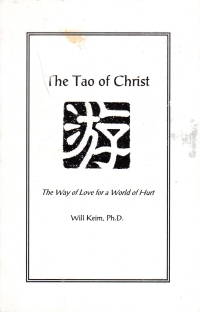 I bought this book in February along with three other books at ABC Books, and I predicted I would read it first since I read The Tao of Pooh in 2016 and The Tao of Elvis in November of 2017. However, of the four books I bought that day in February, I have already read two others (The Virtue of Happiness and The Beauty of Gesture); the other, a history of the Celts, joins another history of the Celts that I bought in 1993 floating around in my backlog.

Well, that’s a lot of bookkeeping. What about this book?

I hoped, as I mentioned, that it would be an insightful comparison of the parables of Christ and the teachings of Lao Tzu, identifying similar thematic elements in each as well as a contrast where appropriate. With a focus on how the Bible is better, of course, along with some little hope that people interested in the Tao might find their way to Christianity through this book (as opposed to Buddhism through Christian Eyes which warns Christians about the sweet seductive lure of heathen philosophy).

It’s more of a daily meditation structure. Each of the 48 lessons presents a teaching of the Tao, a parable or Gospel teaching, and then Keim’s own meditation, some of which seem to have nothing to do with the preceding. Many of them rely on an, erm, contemporary translation of the Tao Te Ching, such as:

When a country is in harmony with the Tao,
the factories make trucks and tractors.
When a country goes counter to the Tao,
warheads are stockpiled outside the cities.

There is no greater illusion than fear,
no greater wrong than preparing to defend yourself,
no greater misfortune than having an enemy.

Whoever can see through all fear
will always be safe.

Strangely enough, the original does not mention factories, tractors, or warheads. So I started comparing the translations of the Tao in this book with another translation that I have, and it has quite a bit of variation in it. I didn’t compare the translations of the parables, though, but the stories themselves were familiar and not updated to modern contrivances.

But Keim is not traditional in the Christian sense as he often refers to God as She; I thought perhaps it was only a translation thing as he refered to the Tao Te Ching Master as either he or she, but, no, he was probably equitably translating the same there as well.

So I was going to say that the best thing about this book was that it got me to reading the Tao Te Ching again and the parables, but now I’m even not sure I read them in honest translations.

So I’m going to have to say the best thing about reading this book is that I’m done.