So as I was going to get my children from school yesterday afternoon, I opened the door in my garage and found a large stuffed frog laying against it. 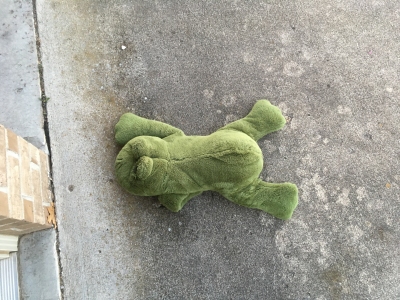 This stuffed frog does not belong to my children; I am familiar with their stuffed animals, especially the large ones.

It was set against the door where the postal carrier tends to leave packages, so I checked it for shipping labels in case someone had mailed us a frog without a box; there were none.

Which leaves me a little mystery, gentle reader: From whence came this frog?

As I am prone to wild speculation, I can only create increasingly outlandish scenarios in my head:

To be honest, I’m not sure what I’ll do with it. We’re not bringing it into the house–as one of the unmentioned possibilities is that it is a Trojan frog filled with frogs hoping to invade my home or, slightly more likely, full of bugs of some sort that we don’t want in. I haven’t talked to my newest neighbors of a couple of months yet, and I haven’t talked to most of my other neighbors for years, if at all. If you think I’m going to use it as an excuse to introduce or re-introduce myself to them, well, think to yourselves how you would react to a strange man knocking on your door to ask if this was your stuffed frog. Yeah, I think that, except probably with more 911 calls and gunfire.

And, to be even more honest, I’m posting about it to keep myself on the amused side of the amused/seriously weirded out line.