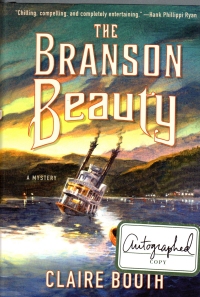 I don’t know where I got this book; it has the markings of a Friends of the Springfield-Greene County Library Book Sale, but I don’t see it in the photos from this year. It also has a Barnes and Noble Autographed Copy sticker on the front, so it’s possible I paid full price for it at Barnes and Noble and didn’t take a photo of it. Weird. What is this blog for if not to remind me where I get all these books?

The plot: A showboat similar to the Branson Belle runs aground on Table Rock Lake, and as the local authorities are ferrying the survivors to shore, they discover a murder victim on board. The newly appointed sheriff has to deal with Branson business interests and a blizzard in his investigation.

It’s a standard midlist sort of book, something akin to the Jesse Stone novels from Robert B. Parker.

Boy, howdy, the author, who resides in California, gets a lot of details wrong. It starts when a deputy says that they’re getting some assistance for the boat rescue from the next county. It doesn’t identify which county, which made me wonder about how many details were going to be wrong. Well, not only does it mention that Table Rock Lake is close to freezing–heaven forbid, the lakes down here do not freeze, especially one of the big dam-created lakes like Table Rock. Then, it’s revealed that the sheriff is from Branson County. But Branson is in Taney County. The kids go to Branson Valley high school, which does not exist–in Branson, the kids go to Branson High School. The book refers to 76 as Seventy-six (this is a copy error, not a factual error). There’s a Latino woman saying there’s no Latino community and that people look at her strangely, but, come on, this is not true. When watching the airports for a fleeing suspect, the sheriff talks about the small airport south of town, the Branson airport, and then talks about friends watching the Kansas City and St. Louis airports, but nobody accounts for the Springfield National Airport here in Springfield. The sheriff waits at a convenience store on the corner of Glenstone and Battlefield across from the mall here in Springfield–and there’s no such convenience store. The Springfield Channel 12 reporter–there’s no such station. Oh, and the cold and snow–it’s not typical down here, so people are not that well-equipped for it and it doesn’t tend to last long.

The book has enough errata of this nature to draw one familiar with the area out of the book and perhaps even doubt if the person whodunit really done it.

Which is not to say that she gets all the details wrong–she mentions the twisty drive to Forsyth, and that’s true, especially if you roll through Rockaway Beach, and she talks captures the drive north out of town on 248 pretty well.

Which makes me wonder about how she got some things right, but so many things so wrong.

Apparently, this is the first of a series, so I’m a bit interested if later books correct some of the errors or whether they just let them slide. If I come across others inexpensively, I’ll pick one up to see. I thought about offering to read the manuscripts to flag things that don’t ring true, but I’m not sure I have the time for it.