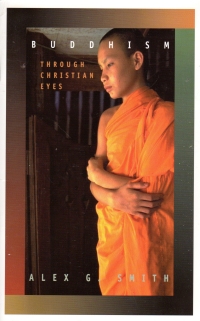 This book is a brief (64 page) primer for Christian missionaries headed to southwest Asia to try to convert Buddhists there. It was written by an Australian missionary with many years’ experience in Thailand, and many of the chapters of the book originated as articles in various religious publications in the region.

The first part of the book talks about Buddhism and how it came to predominate Asia and how it makes its inroads in the West: It does not seek to replace the native religions per se, but rather it complements and then absorbs them. The book then puts into some stark relief differences between Christian scriptures and core Buddhist doctrine (as well as Buddhist scholarship). The stark differences don’t receive a lot of emphasis when you’re reading popular Buddhist books (like Start Here Now), but, then again, you don’t get a lot of the heavy duty Christian scholarship in most church services, either.

At any rate, an informative bit of counterpoint to straightforward Buddhist-themed literature, but a bit apocalyptic on the march of Buddhism to take over the world.