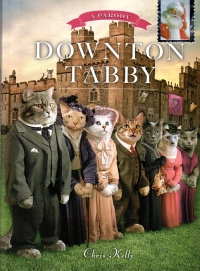 This is not the first nominal tie-in book to the television series Downton Abbey (which I famously gave up on). That honor falls to Downton Abbey Rules for Household Staff. This is the first humor book, though, and might be the last. But it has cats in it.

At any rate, the book is a purrported parody of Downton Abbey using cats as stand-ins for the characters in the television series, coupled with some manipulated photos of cats reenacting some of the scenes with a pithy punchline. It’s not very long, but the joke is carried a little far even then.

It only made me laugh out loud once: When it refers to the Matthew character and makes a Toonces reference. The rest of it, meh. Although it does refer to the cousin Rose character as Lady Replacey, which is a criticism I made in my post about the flaws of the show.

At any rate, worth a browse if you can find it for a quarter or something.