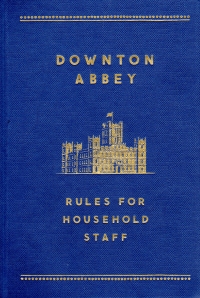 I received this book for my birthday this year; it’s definitely the kind of book bought new as a gift. Or perhaps by serious, institutionizable fans of the show. It contains no narrative, no fan stuff: It’s basically an introduction by the fictional Carson (the butler) writing for new hires at Downton Abbey followed by tips and tricks for each job and their attendant responsibilities.

I’ve said recently what I think of the show these days, but there’s not any of that to dislike in the book.

Carson’s introduction is a nice bit of Stoic philosophy encouraging new workers: You are part of something meaningful and grand, and you should do your best at it. Then the tips and tricks are pretty much polish it with chamois leather. That’s two things I learned from the book: That chamois leather is good for polishing, and the source of the pun inherent in the ShamWow name.

Yes, friends, there are gaps in my classical education, and I’m unlikely to get certain French puns, especially those relating to cleaning products and practices, until decades later when reading gift books tied into British soap operas. Which probably means the chamois/ShamWow joke is the only one I’ll get.

So the book is an interesting little read if you get it as a gift or pick it up at a book fair, but it might not be a thing you order. But just in case you’re institutionizable, note this post is full of convenient links.