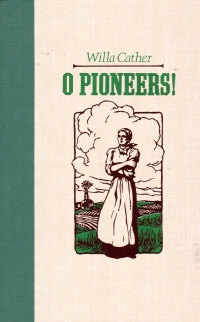 This book fits right into my recent reading of books set in the latter part of the 1800s (which includes the Little House books, most recently Little House on the Prairie as well as Me and My Little Brain). Unlike the others, though, this is not a children’s book.

Instead, it tells about Alexandra, and her family’s efforts to run a farm in the newly settled upper west midwest. The book is broken into several sections. In the first, a teenaged Alexandra goes into town with her youngest brother, who loses his kitten up a pole in the winter, and a friend of hers rescues it. It’s a hard winter, and Alexandra’s father dies, and the friend and his family move away. But Alexandra goes against the advice of her brothers, who want to sell the farm and move as well, and mortgages the farm to add to its holdings as the other families move away.

End section one, and suddenly it’s sixteen years later, and all that has paid off. Alexandra, unmarried and closing in on forty, has made the family prosper, although two of her brothers resent it. The youngest, whose kitten was lost in section one, is now back from the university and is flirting with the young wife of a nearby farmer, a vivacious woman whose husband resents having to farm to support her. To make a short story into a novel, it does not go well.

The book is chock full of what my fiction writing professor would call nice little moments: A description, some characterization of the characters in the book, but the plot, as it is, meanders. We jump from struggle to success without much of that story, and as a frequent Rand reader in my youth, that’s what I’d like to read.

According to my research (which is “reading the flier that came with this Reader’s Digest edition”), the book was originally three short stories that Cather interwove into a novel. I can see that. So it’s a literary novel first and foremost.

The characters, though, seem a little thin and are drawn with less warmth than one sees in the Laura Ingalls Wilder books. Cather, who lived in the upper plains in her youth, did not end up there–she ended up on the east coast. So. I don’t think she’s writing the book for the people that it’s about. She describes some of the land as being like the hills of Lombardy. And her French immigrants are written in a vernacular that sounds more Italian than French.

At any rate, Willa Cather. You know, I didn’t read anything she wrote as part of my English degreeing (but, in my defense, I was in the writing program, not the reading program). So sometimes I kinda conflate her with Eudora Welty. And maybe Pearl Buck. I do have a copy of My Antonia around here somewhere; this book was a pleasant enough read that I won’t hide from the other novel if I find it.