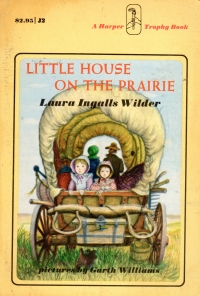 As I predicted when I read Little House in the Big Woods, it was not long before I picked up this book. Of course, I had some control over that, so it’s not really prophecy. As I mentioned in the previous book report, this is the third of Laura Ingalls Wilder’s books; the second, Farmer Boy deals with the young Almanzo Wilder’s experiences in the 19th century. I don’t have a copy of that book, but my youngest son is currently reading a school copy of the book ahead of a field trip to Laura Ingalls Wilder’s home near Marshfield, and he offered to surrepitiously bring the book home every night so I could read it at the same time as he’s reading it. I’m thinking about it.

At any rate, this book covers the move from Wisconsin to Indian territory in Kansas, which Charles Ingalls has heard will be opened for settlement. So they’re sooners sooner than the actual Sooners. They build a little house, meet some neighbors, and not only have to deal with the different challenges and topography of Kansas, but they also have to deal with Indians who they really, really don’t want becoming hostile. Much of the book, as in the previous volume, deals with the man-against-nature stories of building a house, trading, and whatnot, but the introduction of the Indians adds a little drama, as they can suddenly appear in ones or twos and steal your food and tobacco or get together a bunch and threaten to wipe out the settlers. But this drama is told at a distance, as the family huddles in the cabin and watches for a war party.

So it’s not a greatly dramatic narrative, but it is interesting in its historical perspectives. This book was written in the 1930s and takes place in the post-bellum west midwest, but the father speaks respectfully of natives even as others do not and, when the family is sick, a black doctor tends to them. So it’s almost suitably woke (but clearly not enough since it is not Woke™), which might lead one who is paying attention and bothers to read things not written on computers, that maybe the past was not as asleep as they’ve been told.

A couple things of note: I flagged one passage in this book, wherein Laura explains that she and Mary share a cup for drinking water at dinner, and that they only get water, and won’t get coffee until they’re adults. I contrasted this with A Tree Grows in Brooklyn, where the children drink coffee all day and all night.

Additionally, as I read this book listening to the Big Band station streaming from my DirecTV, I realized that the Glenn Miller I was listening to was closer in time to Little House on the Prairie than to today. Weird, we think about culture slowing or stopping in the eighties or nineties, but the rate of change has really slowed down before that.

So we’ll see how soon I dive into On the Banks of Plum Creek or if I take the lad up on his offer of sharing his school copy of Farmer Boy with me.