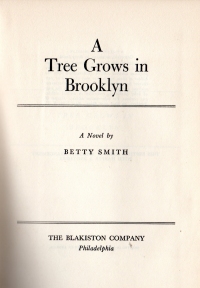 It seems to me that, as I was growing up in the 1970s, that allusions to this book were everywhere, but it might have been that I saw the same Bugs Bunny cartoon referring to it over and over again. It was quite a sensation in its day, spawning a movie and a Broadway play much like you get from modern pop culture forces. This book was also sent overseas with World War II veterans a bunch, too, so it was part of the Greatest Generation zeitgeist even though it was set a generation earlier.

It deals with a young girl, Francie, at age ten in a tenement neighborhood in Brooklyn in 1912. It follows her as she ages into her teen years, after the death of her alcoholic father, and into the period when the US enters World War I. So, basically, the same time as the first couple of seasons of Downton Abbey. But the Nolans are not the Crowleys. The father only works a night a week, and the mother works as a cleaning woman. The kids start out collecting junk (from the rubbish bins of the buildings their mom cleans, which gives them an advantage of other neighbor kids). Francie is a bit of an outcast, a dreamer who wants to become a writer.

I really enjoyed the book. It takes you out of the here and now and into poverty before the Great Society safety net, and it does very evocatively. Forget your Dave Ramsey University for being frugal–reading how this family stretched pennies and managed to save makes me want to nail a tin can to my closet floor and insert pennies when I can.

It’s also a mindbender to find modern themes in a book set in the 1910s that was published during World War II. We’ve got:

You might think these are all 21st century problems, especially if you were educated somewhere in the end of the 20th century or the 21st. However, the book illustrates human nature has always been human nature, and the human spirit has always endured.

At any rate, I recommend it. At the very least, when that Bugs Bunny cartoon comes on, you can tell your kids, “I read that book.”