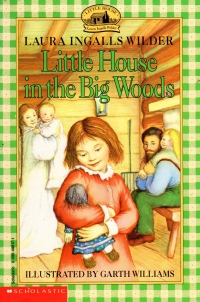 It must be my year for catching up on my old-timey children’s books. Early last month, I re-read Me and My Little Brain from The Great Brain series, and now I’ve read this book, the first in the Little House series (not, as one might assume because the television series bore the title, Little House on the Prairie, which is the third in the series, and I think I have all my commas right between the parentheses here, but I cannot be sure).

As you might know, gentle reader, if you’re over forty years of age or if you’re a school child who has grown up within field trip distance of Laura Ingalls Wilder’s last home in Marshfield, Missouri, these books tell the story of young Laura Ingalls and her family as they grow up on the frontier in a variety of locations during the late middle part of the 19th century.

This book takes place on the western edge of Wisconsin over the course of a year. The chapters are little vignettes of things that happen, starting in the winter with Pa hunting and storytelling by the fire in the long winter evenings, through the emergence of spring and maple syrup season, to the work in the summer (and no meat–as Pa does not hunt during the summer so the little deer and whatnot can grow up) to the harvest and the beginning of the winter. The author touches upon the isolation–it’s several hours ride to their relatives’ homes, and Laura has never seen two houses near each other until she goes to town for the first time–and the amount of work and the frugality (dare I say it, sustainability) the family practices.

The book includes a couple of primers on how to make butter, maple sugar, and various other necessities, so in addition to your Foxfire books, you might want to keep a set of these books around in case TEOTWAWKI teotwakis (because, let’s be honest, it should be a verb by now).

The difference between this book and the aforementioned Me and My Little Brain are separated by a mere twenty some years (that is, the distance between the dot com era and now), but the differences are vast–the world of Adenville, Utah, and the Big Woods. It’s not so much a difference of the decades, although some of that is true–but it is a difference between town and country that was far greater than it is today, although the differences definitely exist. The practices in this book are close to those found in Nebraska after the turn of the 20th century as found in Over the Hills and Past Our Place or even the 1940s in Missouri in Growing Up In The Bend.

I saw a link on Instapundit to an excerpt entitled The Unbearable Darkness of Young Adult Literature that talked about how children’s and young adult literature is currently preoccupied with After School Special parables about the politically favored lifestyles and problems, and I contrast this Man (Child) versus Society (Squares) focus with the children’s books I grew up with that were very much conscious of Man versus Nature and Man versus Man. Most of the contemporary titles won’t have much to say to kids a decade or two from now, not like books about the 19th centuries could speak to child readers in the end of the 20th century. I just hope kids can still relate to these stories.

I can, but I’m a late twentieth century kid whose reading of these classics has been displaced a couple decades.

Also, I would be remiss if I didn’t admit that I heard the television theme whenever I picked up the book.

The next book in the series, Farmer Boy, but it deals with the young Wilder boy whom Laura would later marry. I don’t have it, but I do have Little House on the Prairie which I will undoubtedly pick up before long.

Because I have fallen behind in my annual reading goals this year, and I don’t think looking at cartoon books during football games is going to catch me up. So I must rely on children’s books and religious tracts. And, maybe, counting comic books after all.