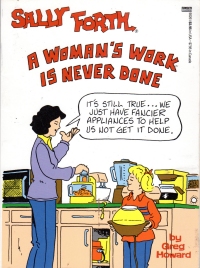 Sally Forth has been around a while now, as this book (and the Wikipedia page) indicates. The book is set at the end of the yuppie era; the parents are busy career professionals, and the title character herself is a career woman offering an empowered heroine at a time, youngsters, where there weren’t that many women executives. I know some would say there aren’t enough now, but back then, there were not any (and as far as how many are enough, gentle reader, I say “enough” is “as many as want to be and are competent to do so” which is not a scientific law measurable with a simple percentage).

At any rate, the two business professionals have a single child, a daughter named Hilary. Where they warning us? Not likely. So you get a crossover of business humor, family humor, and parenting humor, but no sibling rivalry humor. Which keeps the cartoon fresh, I reckon, as it switches contexts. You get some storylines that carry over a strip or two, none of the longer conceits that would stretch weeks like you see in Dilbert.

I mean, it looks to be standard funny pages filler, but I laughed out loud at one of them, which is something I rarely every do. And I remember the era where the topics were current, so it’s got a little nostalgia to it. I see from the Wikipedia page that the cartoon has carried on, so it’s probably also contemporary, so less meaningful to me now. And carried on by others than the original cartoonist, although the strip never broke out of the papers into films and television like some others did.