As I have mentioned, over and over, in an effort to humblebrag my way to your respect, gentle reader, I run a number of 5Ks in the autumn and winter.

This is because my boys are in their middle school cross country program, but since they go to a small school, their cross country events are not actually meets with other schools. Rather, they run 5Ks in their school uniforms, and once they started doing so, I started running as well because physical self-abuse of distance running is easier than making small talk with the other parents or just lingering around the event venue awkwardly without making small talk (my preferred option of the two).

As I’ve entered my third year this season, I’ve come to appreciate the finer points of distance running. To whit:

Perhaps the last thing is the best thing. Like, on Saturday, when I crossed the finish line… 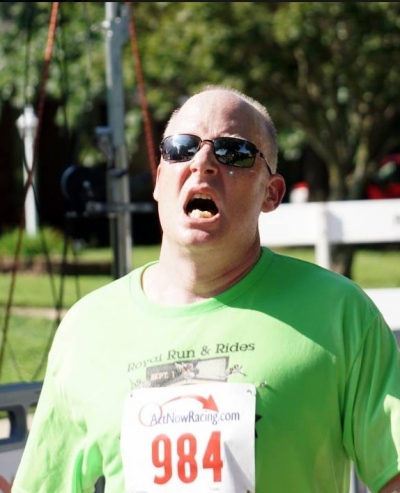 Come on, that’s from Forrest Gump:

I had to explain that to my wife. Come on, the film in only twenty-four years old now, old man. Surely you remember it?

I’ve also used the line noted as number 1 above, which is from an old joke: A doctor asks a man why he keeps hitting himself with a hammer, and the man says it feels so good when he stops.

At any rate, the highlight of the run for me is the things I quip at other runners and volunteers on the route.

I try to keep my breathing such that I can shout out good morning to the volunteers along the route, pointing us in the correct direction, or to people who come out in their front yards to watch us go by. But I like to crack wise as well.

Some of my favorites include:

The quipping keeps me from thinking of myself as a serious athlete or runner, that I focus on the wisecracks instead of Peak Performance. I could probably shave a minute off of my time by taking it more seriously, but that would be less fun than running already is not.

The cross country coach referred to these events as races which would put a little pressure to, you know, win if I took him seriously.

Instead, I’ll continue to think of them as moving open mic nights.

1 thought on “The Third Best Thing About Running 5Ks”