A number of years ago, my mother-in-law gave us a decorative wine bottle for Christmas. It had a madonna-and-child painted on it and a string of Christmas lights in it through a hole drilled in the back. I kind of tut-tutted it when we got it, but in the years since, we’ve taken to putting it onto the mantle in our family room. We’ve also taken to leaving it burning all night, which served as a nice navigational light in the dark. We liked that so much so that I bought a Tiffany lamp for that spot so we could have that navigational light all year round (was that only March of this year?).

So I’ve been interested in wine bottle art for a little bit. I once bought a glass cutter on a compass so I could cut the bottles, thinking I’d make candle holders by cutting the tops off, but I never perfected that.

I did, however, buy a diamond hole-cutting drill bit with the intention of making the lights/lamps like the one we received as a Christmas gift. So I saved a bunch of wine bottles up, built a template to steady the drill, and bored a hole through a pile of bottles with varying degrees of success.

Once holed, they sat for a while, as I, like my sainted mother, do not like to rush into things. I painted some with stained glass paint and didn’t really like that look 100%; the new lights I bought have white cords, and the cords are very visible through the bottle instead of just shining some light on the bottle. 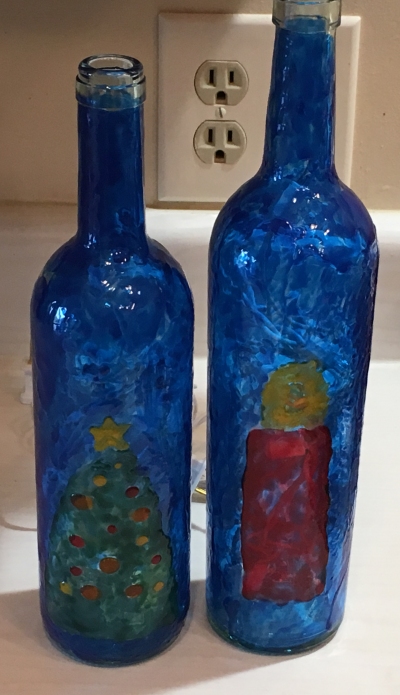 So I got some diamond etching tips for my rotary tool (a gift from the aforementioned sainted mother, a gift that I thought I would never use for anything), and now we’re talking.

That’s the first one I’ve done, a winter scene probably because I just read Little House in the Big Woods. You can really see the cord in that one.

I’m pleased how the etching turned out, especially since I did it freehand, which is unlike how I do my wood burning.

So I know what everyone is getting for Christmas this year, and I have enough bottles saved that perhaps I’ll have some things for the craft show I’m going to someday participate in.