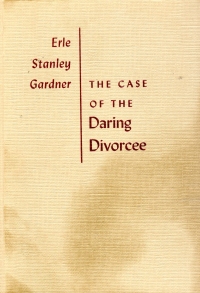 But I digree–which, to be honest, the digressions are worth more than the book reports themselves. What to say about this entry, apparently the 74th in the Perry Mason line? A young woman desperately seeking his help shows up at Perry Mason’s office, leaves for a moment, but does not return. She did, however, leave her purse which contains a gun that has been fired twice along with her identification. Mason investigates and finds that the woman whose purse it is did not leave it in his office and is being framed for the murder of her estranged husband. Meanwhile, the man’s second wife shows up to claim his property and company, saying that she did not actually follow through on their divorce, so the framed wife was not his wife at all.

It leads to the usual Masonesque legal maneuvering, culminating in a courtroom demasking of the real culprit. Which is rather quick and a bit forced; the real killer and accomplice were bit players until their unmasking, which is ultimately a bit unsatisfying.

Still, one has to admire the lean prose from Gardner’s books. There’s not a lot of description or flourish in it. Most of it keeps the action moving forward. However, I don’t think I could sit down and read a pile of these in order, as the “plot” would be unmasked, dramatically, as “formula.”

Still, these books hold up pretty good and don’t seem dated to people of a certain age.

“If it [a stolen gun] should appear,” Mason said, “that the defendant and this witness conspired to get some evidence from my office, then the taking of the gun would be an overt act which would make him guilty of a separate crime, the crime of criminal conspiracy/ Taking the gun is one thing, conspiring to take it is another. They are both crimes.”

“No, it isn’t,” Mason said. “Whenever you people draw up an information or a complaint against a person you put in just as many counts as you can think of. You put in a count of criminal conspiracy and you put in a count of the criminal act. Then you try to talk a jury into returning a verdict of guilty n every count in the indictment. You claim each count is a separate crime, that you don’t make the law, you only enforce it, that if the legislature has chosen to make it a crime to conspire to commit an unlawful act and a defendant conspires to commit such an act and then does commit the act, he’s guilty of two separate crimes.”

Sixty-four years later, this holds true, and sixty-four more years of “tough on crime” legislators have invented even more crimes to prosecute.