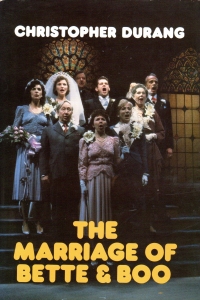 You could probably have guessed after I bought a couple books while out of town for the night that I’d pick up the shortest book to read in my hotel. And you would be right.

As I mentioned, I saw this play in college. Ah, my senior year: I saw a large number of plays with a number of comely young ladies, none of whom was interested in me. Well, maybe a couple were and I was oblivious to it. I had to attend this play for one of my classes, and I sat next to a young lady who I knew from the writer’s club. After the play, we walked out together, and she straightened my tie. Did that indicate interest? I don’t know. When reading others’ emotions and acting upon them, I’m a chimp at the space shuttle controls: I know something’s happening, and I know I should do something, but I just press the wrong buttons.

At any rate, I remember the play not only because of the young lady but also because the play disturbed me a bit. It’s told from the point of view of an English student reminiscing about his family life and his parents’ marriage which ends while he’s at school. I, of course, had studied a bit of Thomas Hardy at the time (one of the devices of the play is that the narrator talks about analyzing Hardy’s works as he’s analyzing his parents and perhaps their influence upon him). As the child of a broken home (relatively fresh at that, what, with their marriage still longer than the period they’d been divorced), I felt for the kid. Who was older than I was at the time.

So I saw the book, and I remembered almost viscerally the reaction I had to the play at the time, so I bought it and read it again. As an adult (older than my parents when they divorced and almost as old as my father was when he died), I don’t get quite the poignancy that I did then when I identified with the lad, but I do still have a bit of sadness for the characters in the play. I think it’s billed as a comedy, but it’s more a tragedy than a comedy. Even though the moments from the play stuck with me–I’d forgotten a part where a priest imitates bacon, but when I got to it in the book, I immediately remembered the scene on stage.

So it’s a good play, all right.

The edition I have has a lot of end notes from the playwright (who played the main character in the big New York production of it in the middle 1980s) giving a lot of direction for the direction of the play, including some interpretations that he did not care for in some productions. I’ll be honest, that’s a bit of cheating: In my playwrighting class, the professor said to put all that in the words and stage directions, and to put only the bare minimum in to allow for as much interpretation as you can stand. So the end piece seems a little uncricket.

Also, this book is again a book club edition. Which means our parents or grandparents liked plays enough to buy them from a book club. I cannot even imagine that. There aren’t that many people who buy plays these days (or maybe it’s just me), but I don’t remember seeing many of them in the book stores or book sales I frequent–I know, as I buy them. That’s a shame, as they’re often nice, quick reads with impact beyond their word count.