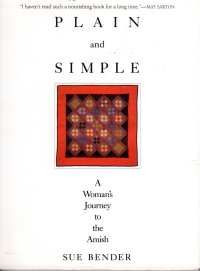 You’re taking a look at my recent reading and note that I bought all of these books within the last two weeks, and you think, “Hey, Brian J., wouldn’t it be better to have only bought these three or four books, read them, and then buy a couple more instead of buying dozens at a crack, dozens of times a year ensuring you have a backlog of thousands of books that you don’t have lifetime enough left to read them all?” I supposed that would be one way to do it, gentle reader. But allow me to answer with a question of my own: Why do you have so little faith in medical science?

But we digress. As noted, I bought this particular book a week ago and jumped right into it. Its title indicates a journey to the Amish and a spiritual journey similar to what you might find in books on Eastern philosophy.

And, indeed, this one might be a little self-consciously similar to those sorts of mid-life coming to spirituality books. It refers a couple of times to Zen philosophy and quotes a Tibetan warrior. So you might think that the author had a spirtual journey book in mind when she started her this particular journey.

The author also comes from a pretty well-to-do background. She lives in New York, but she and her husband pack up to move to California. She starts doing art and whatnot. She has a couple of advanced degrees. She even mentions that the Amish she lived with thought she was rich because she was from the outside world and because she just spent five months in Italy. Um, ma’am, in your world, you might just be working class, but amongst the rest of the world, you are rich.

At any rate, she becomes enamored with Amish quilts that she finds in craft and antique stores and wants to live with them. Which she does. For three weeks. And then she comes back and thinks about it for a while and goes back for a couple of weeks. She doesn’t really want to become Amish nor does she have a particularly religious connection to them (they are a religious community, after all), but she just wants to find some neo-Buddhist mindfulness lessons from them, which she does, which is fortunate, since she has a book about it.

It resembles John Howard Griffith’s experiences recounted in Black Like Me as a bit of self-conscious social anthropology (with a bit of spiritual yearning for seasoning) that is ultimately not very satisfying. Perhaps I’m just particularly cynical.

However, I hope if the author was sincerely looking for something, she truly found it in her brief visits to Amish communities.