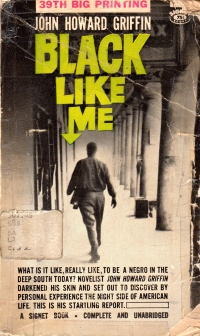 I read this book back in college in those heady days twenty years ago when I’d skip my classes in the core requirements (did your humble narrator actually get a D in a university-level class? Yes, yes, he did) to read in the library. That is before this book came upon its fiftieth anniversary edition and back when I might have been a little less skeptical of the book.

This was a very big deal when it came out, and it details the author’s experiment where he darkened his skin with some drugs and UV treatments and passed as a black man in Louisiana, Mississippi, and Georgia in the November and December of 1958 or 1959. This book collects a series of articles he wrote for the magazine Sepia and includes some material about reactions after he published the stories.

As I mentioned, I read this book in college. I then read a collection of Langston Hughes poetry because the title comes from a Hughes poem (“Dream Variation”). That’s what I did in those days when I should be attending a college class: reading a book my high school sociology teacher (Mrs. Hutson) referred to once, and then following the chain. I’d also memorize a Hughes poem ("Dreams") which I would not burst out with during a college class of The Church and Racial Justice when Rebecca W– asserted that whites never learned their culture even though I could. Let’s just say that as a young man, a product of the projects where I was the minority and whatnot, that I thought some about The Race Question when it was a question and not an answer to every political debate.

Not with what Griffith did and maybe not even what he intended, but how he presented it.

As I mentioned, he has included a frame around the actual journey, wherein he talks about his decision to undertake the transformation and the aftermath. In part of the intro, he announces that he’s an expert on race relations. And there’s no reason given. Perhaps, in certain quarters in 1961, people knew him and knew this to be true, but he really should have gone into that.

Additionally, so much of the book is his interior life, his reactions to events, and his moralizing and sermonizing on the Race Question along with telling us how the Negro thinks. Again, there’s no background or source for his expertise or why we should take his word for it–except that he’s darkened his skin and has gone to Louisiana.

The actual events and interactions he includes in the book are sparse and bare-boned. He details the first day pretty concretely, including his association with a shoeshine stand owner and his arrival in New Orleans, his taking of a room, and a political meeting. Then we get a lot of overview about how far he has to walk, the infrequency of places where he can use the facilities, and a bit of concrete interaction with the shoeshine guys. He talks broadly about looking for work, but the concrete details are lacking. Then he goes to Hattiesburg, Mississippi, takes a room, freaks out about being in Hattiesburg, Mississippi, calls up a newspaper friend who picks him up and drives him out of Mississippi. Then he goes to the coast of Mississippi and begins a whirlwind tour of the south in his last couple of weeks.

So he never really settles in anywhere but New Orleans (for about two weeks) at the onset. So overall, the book takes on the flavor of Barbara Ehrenreich’s Nickeled and Dimed or any of the modern journalistic escapades where a journalist parachutes into a different lifestyle for a short period of time and discovers that the experience conforms with his or her preconceived notions, but with a little touch of colorful flair that makes it interesting. It captures more the experience of being a white man passing as a black man in the south moreso than the experience of being a black man in the south.

Also, it could probably have done with a companion study of what his experience would have been travelling through New York City, Detroit, Chicago, and Bangor, Maine while his skin was darkened.