Apparently, kids in the olden days were worried about being too skinny given this historical evidence found in the back of every single Marvel comic circa 1980: 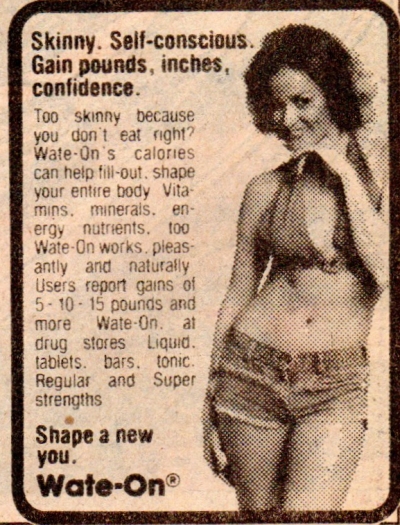 The image is that of a young lady, but it’s probably not directed at the ladies, you know (although there is such a thing as too thin for a woman, and if you look at fashion and health magazines, you’ll see it). Instead, it’s directed towards people like me circa 1980.

Rest assured, me in 1980, you’ll gain those inches and pounds once you reach middle age.

I haven’t picked up a recent comic, but if they had any advertising in them these days, I would expect them to have the opposite sort of come-ons. As much because the kids are a little heavier these days, but the average comic book reader these days has probably also reached that place where the pounds and inches come easily. We’re not too far off from television advertisements where the announcer says “See our ad in The Incontrovertible X-Men!