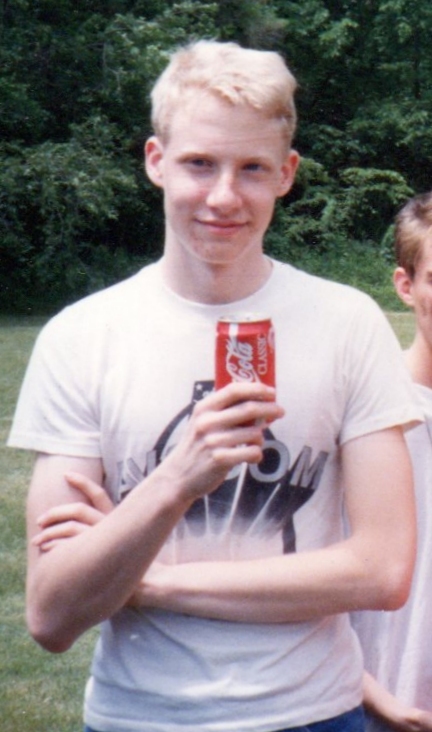 The older gentleman has a grandson who attends school with my boys, and we occasionally exchange words about the weather or whatnot as we stand in front of the school awaiting the emergence of our respective progeny. Another topic of the infrequent exchanges is how fast the children are growing, and how big they will be soon. When speculating on it, he noted that his grandson is bigger than he is and that the lad will be pretty big indeed. He assessed my size and proclaimed my children would be tall, too.

“190,” I said. I’d just been to the doctor and got an official ruling from a trained medical professional.

It is odd to think of myself as a big guy. I haven’t come to grips with it. The picture is from my high school graduation party in 1990. I was six foot tall and about 120 pounds. By the time I got out of college, I was a little bigger, but I still lied on about my weight when asked about it for my driver’s license because I was ashamed to only be 140 or so. I wanted to be bigger, but I couldn’t do it. I exercised a bunch and could lift some weights, but I never gained weight. I ate four thousand calories or more a day, including protein shakes at one point, but I still remained relatively thin.

My father weighed 180, or so I have been told. I’ve also been told he was 6’3″, but by the time I got to my adult height, his years in a warehouse and a couple of back surgeries left him shorter than I was. For much of my life, I never expected to be as big as he was.

But here we are. A couple decades’ worth of slightly slowing metabolism, doughnuts, liquor, beautiful wife’s cooking, and on again, off again, but mostly off gym membership and utilization, and I’m suddenly man-sized.

But I still don’t see myself as man-sized. From inside, looking through the little apertures of my eyes, I still see the world as I did then, when I was a young reed in the wind. I still call everyone “Mr.” and “Mrs.” and “sir” and “ma’am,” but so many of them are younger than I am these days, too. “Kid” to me now covers into the middle thirties, and my doctors and holy men are younger than I am.

Sometimes, I think I see the world the same way as I did when I was that kid. I guess I’m grown up now, too, and I know how to do taxes (send an email to my tax preparer), do small home and auto repairs, and be places on time. But occasionally, I think I’m still a young man. Generally, this comes when I’m facing some character flaw that has dogged me for decades, or whether I wonder whether behaviour I demonstrate appropriate for a man of my middle age (of course, some behaviours, like extraneous British Us thrown in for effect, are not appropriate at any age).

One of the things I’ve done my whole adulthood is overthinking and over-analyzing things, but even in the 21st century, I don’t bow my head to screens all my waking moments, which gives me a lot of time to turn over things in my mind. Like the question of identity. Are our selves only an illusion of different distinct people through time? (A link today on Instapundit leads to an article entitled “Personality CAN change dramatically: You’re a completely different person at 14 and 77, according to the longest-ever study into human character“).

So I guess I might not be that kid any more. I’m certainly not that size any more.