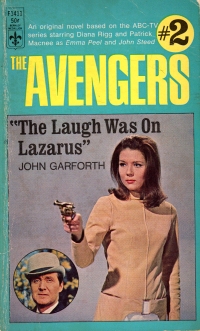 This book did not have Iron Man in it. I guess Robert Downey, Jr., wanted too much to do it.

I guess not; this is the wrong The Avengers. This set is the 1960s British Secret Agents, mod 60s woman Emma Peel and staid John Steed. I’ve never seen the series, and I even missed the almost twenty year old film starring Uma Thurman and Ralph Fiennes, so I didn’t really know what to expect.

It’s a slightly silly, disjointed book. A biotech company can raise the dead, and there’s a priest, and zombie American servicemen who can remember how to fly a stolen plane to the Pentagon. Or to New York.

I don’t know what to make of the story, how it relates to the others in the series, or to the television program. The book has a lot of interior Steed attracted to Peel but unable to say, and I don’t know if this is something that showed up in the program or if it’s a bit of the author’s own invention, thinking that Steed would because what man is not hot for Diana Rigg in a cat suit? I’ve seen that sort of thing before in books, although I cannot recall in which television series or movie novelization book report I remarked on it.

At any rate, of the two period television shows whose tie-in books I’ve read recently, the Kung Fu books (here and here) are better.

But I’ve got a couple more from The Avengers; maybe they’ll grow on me since I’m not going into them cold.