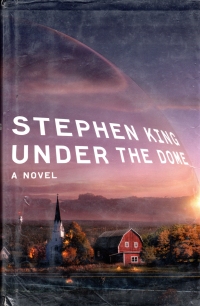 SPOILERS IN THIS REVIEW

So I’ve tucked it under the fold for your protection. Unless you come from a social media site or feed directly to this page, in which case there is no fold. TURN BACK NOW, YOU FOOL.

I have a new theory of Stephen King books: Stay away from the ones with aliens in them. The books with the mere supernatural, whether it’s demon-possessed cars or malignly re-animated animals (or evils that might or might not stalk a young girl lost in the woods) are okay. Books with psychics in them, whether a pyrokinetic or a clairvoyant work mostly. Books with aliens in them, like The Tommyknockers and It didn’t thrill me, and Dreamcatcher and From a Buick 8 fared slightly better in my estimation.

This book has aliens in it.

At any rate, I picked up the book recently and, because I knew there was a television series based on it, I jumped right into it. I don’t watch much television, but put a television-tied book in front of me, and apparently I’m all over it.

The book covers a situation around a small Maine town when a nearly impermeable barrier descends around it. People and objects cannot pass through it, and only a little air or water can. So the situation inside the dome descends into an adult Lord of the Flies situation, with a local selectman taking authority (not allowing the crisis to go to waste). Of course, the selectman, along with the town pharmacist and the preacher of the local megachurch have been running New England’s biggest meth lab at the church’s radio station. An Iraqi war veteran is on his way out of town after a dust-up with the selectman’s son, but he doesn’t make it out of town before the dome descends, and he becomes Public Enemy #1 according to the selectman. Meanwhile, the man behind the meth lab has gone fully psychotic and prepares for a biblical judgement upon those who would take his meth away. Which turns out to be the town selectman’s new amateur police force.

The book takes place over a little less than a calendar week, or about 200 pages per day. In the 1100 pages cut, the author’s note tells us, from more than 1500, this gimmick and its plots play out in the typical Kingian fashion. We get a lot of backstory and interaction among various townsfolk, most of whom die. By “Most of Whom,” I mean greater than 98%. So a lot of it could have been cut, but I guess the plot’s not the thing, really, here, and the hero(es) of the book are not much more than minor characters. They don’t do much, really, to save themselves (not to mention to save the others), and the bad guys die, but just die because everyone’s dying. Then the bad guys sorta communicate with the aliens and get them to just lift the barrier.

King definitely fits in the Lovecraftian mold: the characters in the story win by merely surviving the events that happen to them, events they can barely understand and barely influence. So that, and the ending, bother me a bit.

As I alluded to, the climax of the book occurs when the meth cook blows the meth lab up, which starts a firestorm that consumes most everything in the dome except where the heroes are protected by a firebreak. They’re saved from asphyxiation by industrial fans placed outside the dome by the military at the request of the veteran (who has been in contact with the outside world–needless to say, it’s a long story). Then, just as they’re about to die, the “heroes” contact the aliens who placed the dome, children aliens observing the humans, and shame one into removing the dome, and everyone, by which I mean less than a dozen out of the several thousand whose whole stories we get in the book, live happily ever afterish.

Alien children just watching the people right when a great fire was going to occur, although the aliens didn’t know it. Were I writing the book, I would have introduced some ambiguity into it whether the aliens were sacrificing the town to prevent a greater disaster. Something like that. But I’m not a Lovecraftian at heart.

I prefer King’s shorter, more focused works, I guess. Ever since he got into the thousand page epic books, I’ve enjoyed the writing, but I’ve never sat down without knowing exactly how far I had to go to get to the end, and I could very often measure it in other novels.

So I guess this book is for you if you’re into Stephen King a lot or are looking for something to read over the course of weeks. Or if you were so inclined until I told you the whole plot.